Top seed Alex Bolt was stretched to five sets by 18/u finalist Benard Nkomba in his opening match at the Australian Open Play-off on Monday at Melbourne Park. 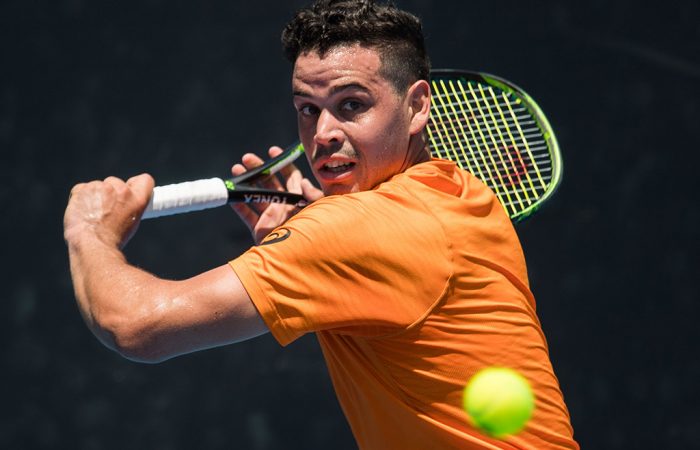 It was a feeling of relief for men’s No.1 seed Alex Bolt as he overcame spirited wildcard Benard Nkomba in five sets to advance to the second round of the Australian Open Play-off at Melbourne Park on Monday.

Nkomba’s form from last week – when he won five matches before falling to Alexander Crnokrak in the 18/u Australian Championships – really paid off, and he tested Bolt from the beginning.

The two traded huge serves and impressively powerful groundstrokes, yet Bolt’s serve in the end provided a few more free points, helping him scrape through with a win.

“It was a relief,” Bolt said after the match.

“To be able to get a win it’s pretty nice feeling to just get through, against a really tough player today.”

Bolt was returning to Melbourne Park after having success in January, qualifying for Australian Open 2017 when he was ranked ranked No.521.

“To be honest, I didn’t expect much at all this year, and to have the results I’ve had I’m really happy,” he said.

“Obviously qualifying for the AO is a great achievement, and making two finals of Challengers when I’ve never done before.

“I think I played some really good tennis consistently this year, and I’m really happy where I’m at.”

Bolt took most of 2016 off and played football, something he doesn’t regret.

“It was the best thing I could have done for my tennis,” he said.

Tennis fans will be eagerly watching his second-round match at the AO Play-off, where Bolt will play the teenager who beat Nkomba in the 18/u final last week – 17-year-old Alexander Crnokrak.

Tennis fans flocked to Melbourne Park for the start of the AO Play-off, and the matches were watched by some current and former Australian tennis stars including Nick Kyrgios, Thanasi Kokkinakis, Lleyton Hewitt, Jason Stoltenberg and Mark Woodforde.

Australian Open main-draw wildcards will be awarded to the men’s and women’s winners of the Play-off.

The women will kick off their tournament on Tuesday.