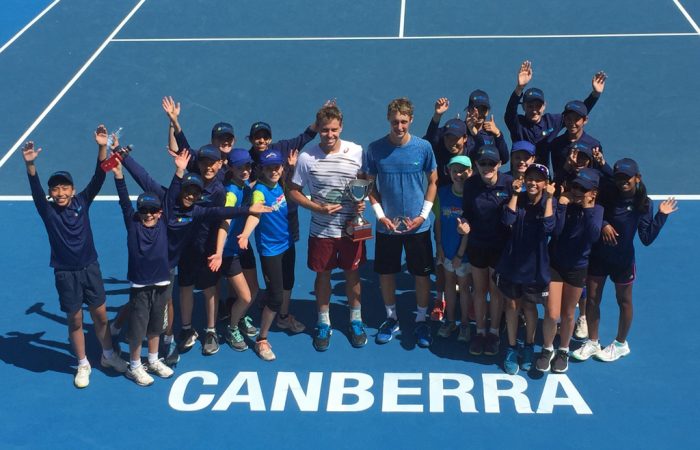 The 24-year-old has now won four career ATP Challenger titles, including two this year – the first in Bangkok in May.

“It’s nice to finally break through in Australia,” the fifth seed said after downing the fast-rising Melbourne teenager 7-5 6-3.

Duckworth enjoyed a solid week in Canberra, which included a straight sets win over top seed Jordan Thompson – who was gunning for his third consecutive title – in the semifinal.

The final opened in tense fashion with the first 11 games not yielding a single break point before Duckworth’s greater experience began to influence proceedings.

“Having played in a few Challenger finals before definitely helped,” he said. “It was pretty valuable in those key moments at the back end of that first set.

“I feel like I wasn’t as aggressive as I would’ve liked to have been early on. I really made a conscious effort at 6-5 to just take things to him and hit out a bit. I made a couple of good approaches and then really put the pressure on.

“That’s how I got the break and I feel like I continued to roll on into the second set after that.”

Duckworth was full of praise for Polmans, who was playing in his maiden ATP Challenger final. Polmans is expected to rise to just outside the world’s top 200 when rankings are released next week.

“He’s had a great last couple of months and won a lot of matches,” Duckworth said.

“His biggest strength for sure is his fighting qualities. He never gives up and competes super hard every point. I really commend him on what he’s done.”

Polmans’ spirit was on full display during his semifinal encounter with fellow teen Omar Jasika, in which he came from a one-set deficit to snatch the win in a deciding tiebreaker.

Duckworth will now head to ATP Challenger events in Japan (Kobe and Toyota) before the end of the season. Now sitting at a provisional No.130 in the world, he hopes re-entry into the top 100 is not too far away.

“If I can keep playing at a high level and keep looking after my body, I feel like I will be at my best sooner rather than later.”