Aussies at Wimbledon: singles done, but show goes on

Australia's singles representation came to an end after Nick Kyrgios and Bernard Tomic lost on Monday, but several Aussies remain alive in other events at Wimbledon. 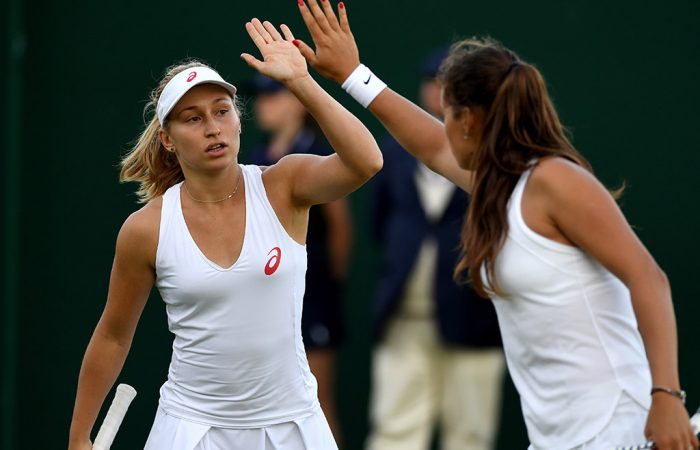 Nick Kyrgios and Bernard Tomic bowed out of Wimbledon on Monday in fourth-round losses, bringing to an end Australia’s singles representation for 2016.

Yet in other events, Australians are in abundance, and flourishing.

Here’s a run-down of who remains alive at The Championships in 2016.

Victorian John Peers and Finnish partner Henri Kontinen advanced to the men’s doubles quarterfinals on Monday with a thrilling five-set victory over sixth seeds Florin Mergea and Rohan Bopanna. The 10th seeds won 8-6 in the fifth and could potentially play another Aussies – Sam Groth – and his Swedish partner Robert Lindstedt in the last eight. That’s if Groth and Lindstedt can get past No.1 seeds Nicolas Mahut and Pierre-Hugues Herbert.

Meanwhile, Daria Gavrilova has teamed with another Daria – Kasatkina, of Russia – and has advanced to round three. Awaiting the “Dashas” for a place in the quarterfinals is 10th-seeded American duo Raquel Atawo and Abigail Spears.

A highly-regarded doubles player, Anastasia Rodionova continues to accrue victories; the recent Eastbourne doubles champion has teamed up with Bopanna in the Wimbledon mixed event and together they have advanced to the third round. Seeded 13th, the Aussie-Indian pairing next face Colombians Juan-Sebastian Cabal and Mariana Duque-Marino for a quarterfinal slot.

Aussie teens Alex De Minaur and Blake Ellis have won through to the second round of the boys’ singles event; De Minaur, seeded seventh, straight-setted Estonia’s Kenneth Raisma to line up against Italian Enrico Dalla Valle in the last 32, while at the same stage of the draw Ellis will meet 16th seed John McNally after a three-set opening-round win. Jaimee Fourlis progressed to the second round of the girls’ event on Monday with a comfortable victory local Lauryn John-Baptise and will next face No.3 seed Amanda Anisimova, who recently reached the Roland Garros girls’ singles final.