Yoshihito Nishioka will take on Jason Jung in the men's final while in the women's decider it's a 1 v 2 seeded battle between China's Wang Yafan and Han Xinyun. 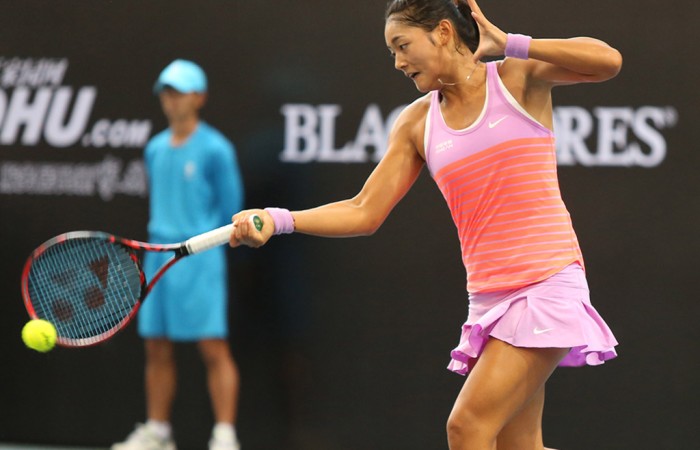 Straight sets victories to Yoshihito Nishioka and Jason Jung have set up an intriguing final at the 2016 Australian Open Asia-Pacific Wildcard Play-off.

Nishioka, the top seed in Shenzhen, faced China’s Li Zhe in the semifinals; he broke serve in the seventh game en route to pocketing the first set, and dominated the second to run out a 6-4 6-2 winner.

“Last year I played Li and lost, so today I really wanted to win. I know he has a great serve and strong forehand, so I changed my tactics and played a little bit defensive, it worked really well. I made a lot balls back in the court, which cause him some errors, he didn’t know what to do. For me, it was a great match,” he reflected.

“Tomorrow’s final will be a very important match for me, and also the opponent is tough to play, I think both of us need to play the best match of this year to try to be the champion.”

His opponent in the final, Jung, came through with a commanding semifinal victory over Taiwanese compatriot Yang Tsung-Hua.

Very strong serving saw Jung leap to a 5-1 lead in the opening set, and once he took that, the second set went almost exactly the same way.

“I thought I played pretty good today, everything was working for me,” he said.

“I just played Nishioka two weeks ago in Japan, he beat me in two sets, and I was leading 4-1 in the second set, but tomorrow is different, hopefully I can keep serving well and get the revenge.

There’s definitely pressure for sure because of the wild card, you just try to not think about it. It’s such a great opportunity, at the end of the day there is still one more match, you have to be focused on that match.”

In the women’s draw, the final will feature a battle between No.1 and No.2 seeds after Wang Yafan and Han Xinyun came through their semifinals in contrasting styles.

With Lu mixing things up in the second set, she was rewarded when she broke Wang’s serve in the ninth game and held onto that advantage to send the match into the third.

“The first game of the deciding set was really crucial for both of us, I knew if I got broken, the match would be very difficult for me to win, so I just told myself to fight. It was definitely the turning pointing of this match,” Wang said.

From 2-0 down in the second set, Han hit winners into every corner of the court, reeling of six straight games to close out the match.

“I just lost to my opponent two weeks ago in Hua-hin Thailand, so I gave myself a very good preparation for today’s match, and tried to attack first. Luckily I hit a lot winners,” she said.

“I didn’t expect to be able to make the final here, because last few weeks I wasn’t playing good, but the encouragement I received from my team really helped me, now it’s just one more match to go.”

Added Wang: “I think both players want to win the final really badly, because it’s a great opportunity to have a chance to play a main draw match in a Grand Slam. But I will try not to think about it too much, and keep focused on how to play against her.”

Doing the same was the women’s combination of Shuko Aoyama and Makoto Ninomiya, both of Japan.