Ash Barty has capped off her stellar season, which included winning the French Open and finishing as world No.1, by being voted WTA Player of the Year. 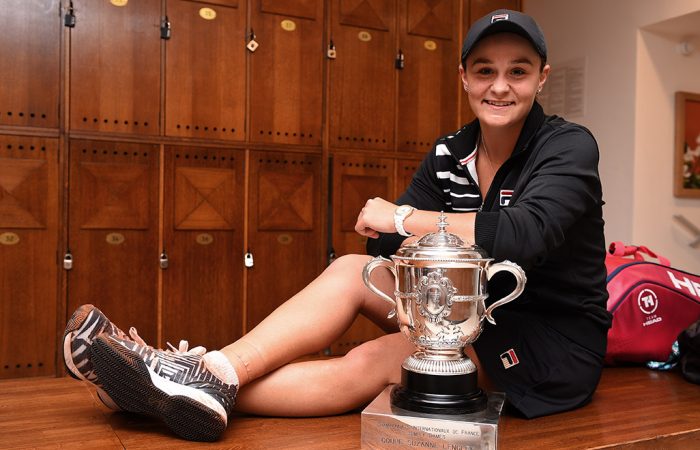 Ash Barty has been voted WTA Player of the Year after capturing her maiden Grand Slam singles title and reaching the top of the world rankings.

The WTA said the 23-year-old garnered 82 per cent of the media vote to comprehensively beat 2019 Grand Slam winners Bianca Andreescu, Simona Halep and Naomi Osaka, and former world No.1 Karolina Pliskova, for the award.

It adds to the list of accolades the world No.1 has collected this season, including her third Newcombe Medal last week.

On Tuesday this week, Barty’s coach Craig Tyzzer was named WTA Coach of the Year.

Barty, who quit tennis in 2014 and turned her hand to cricket before returning to the game in 2016, became the first Australian to win the French Open since Margaret Court in 1973 when she beat Czech teenager Marketa Vondrousova 6-1 6-3 in June.

She also won the prestigious Miami title and became the first Australian woman to reach the WTA world No.1 ranking since Evonne Goolagong Cawley in 1976.

🎊 WTA Player of the Year 🎊@ashbarty, you’re one of a kind.#GoAussies | @WTA

“Moreover, she had success on all surfaces, finishing in the Top 10 on Tour for wins on hard courts, clay courts and grass courts over the course of 2019 and winning tournaments on each,” the WTA said on its website.

Barty’s 57 match wins this year was the most by any player, while she lost only 12 times.

The WTA said Barty’s on-court statistics “back up what a stellar year she enjoyed”.

Andreescu took the Newcomer of the Year award after winning the US Open to become the first Canadian to win a Grand Slam singles title.