John-Patrick Smith verges on qualifying for a Grand Slam main draw for the first time ever after an impressive Wimbledon victory on Wednesday. 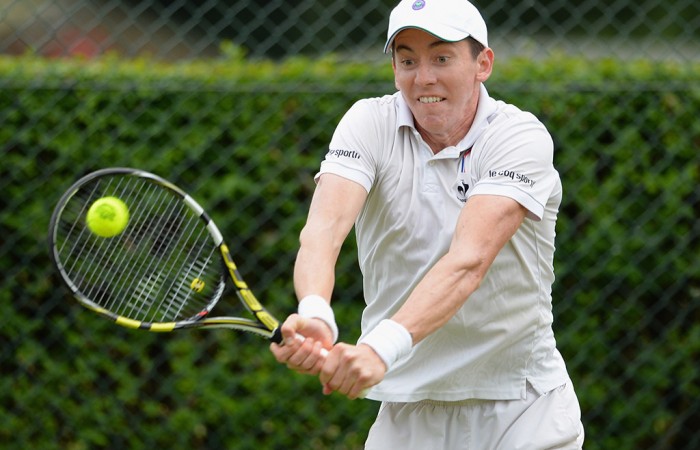 Queenslander John-Patrick Smith stands on the verge of qualifying for a Grand Slam main draw for the first time ever after an impressive Wimbledon victory on Wednesday.

Playing in the second round of qualifying at Roehampton, Smith dismissed No.18 seed Bjorn Fratangelo 7-6(5) 6-4 to move to within on match of the main draw.

He joins compatriots Luke Saville and John Millman in the final round.

After a tense opening tiebreak in which Smith saw a 3-0 lead slip before sneaking through seven points to five, the Aussie used his biting left-handed serve and rapid-fire attack to full advantage to seal victory in one hour and five minutes.

“Winning this match today was good because obviously Bjorn’s a good player, so it’s been good to get a couple of matches like that under my belt here,” he said.

“It’s actually the first time I’ve won past the second round of qualifying for a major … I think if I can qualify that would obviously be testament to how much I’ve improved.”

Indeed, in the past three years across eight appearances in major qualifying, Smith has advanced beyond the first round just three times.

Making it this far, and potentially qualifying at Wimbledon – on a surface that he admits he is not the most comfortable on – would represent a significant step in his career.

“It was a tough match, tomorrow will be even tougher, last round, so hopefully I can play well again,” Smith said, ahead of his match against Czech Jan Mertl.

“Best out of five tomorrow, so bring it on.”

Unfortunately, fellow Australians Ben Mitchell and Jason Kubler were unable to join Smith, Saville and Millman on the winners’ list.

Mitchell played out a high-quality three-setter against Marton Fucsovics of Hungary which featured some athletic baseline rallies.

But after Fucsovics came out on top of an entertaining fifth game of the third set, he never looked back, reeling off three sraight games to complete a 6-3 3-6 6-2 victory.

It was a similarly heart-breaking defeat for Kubler, who stretched Aleksandr Nedovyesov to three sets before falling late on Wednesday.

Kubler battled hard for the whole match but played a sloppy ninth game in the third, committing three forehand errors – two framed out of the court – to drop serve.

Nedovyesov comfortably served out the match in the next game to win 3-6 6-3 6-4.