Sam Stosur trounced Monica Puig at the Internationaux de Strasbourg to reach the second round, while Sam Groth and Marinko Matosevic fell at their respective claycourt events. 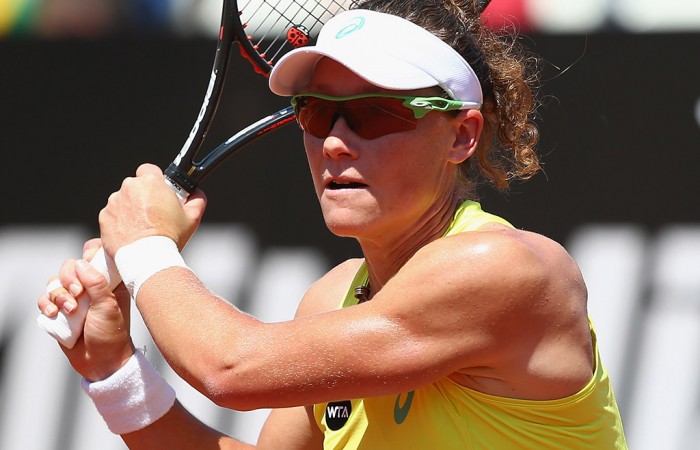 Sam Stosur has trounced Monica Puig at the Internationaux de Strasbourg on Monday to move through to the second round.

It was the third victory in three meetings for Stosur over the Puerto Rican youngster; she has dropped a collective total of just nine games in those matches.

Next up is 67th-ranked Ukrainian Lesia Tsurenko.

Impressive on serve throughout the match against Puig, Stosur landed five aces, won 82 per cent of first serve points and faced only one break point.

She and fellow Australian Ajla Tomljanovic will take to the court in Strasbourg on Tuesday for their second-round matches; Tomljanovic takes on American Shelby Rogers.

Should they both win their matches, they would face off in the quarterfinals.

Meawhile, further south in France, Sam Groth fell in the opening round of the ATP Open de Nice Cote d’Azur.

Three Aussies – Bernard Tomic, Nick Kyrgios and James Duckworth – are in action in Nice on Tuesday; the fourth, Thanasi Kokkinakis, withdrew from the event citing fatigue.

He was due to face Duckworth, who will now battle American lucky loser Frances Tiafoe.

At the ATP event in Geneva, Switzerland, Marinko Matosevic fell 7-6(2) 6-2 to Albert Ramos-Vinolas of Spain