Australia's Fed Cup World Group Play-off loss to the Netherlands has left the team shell-shocked and searching for answers. 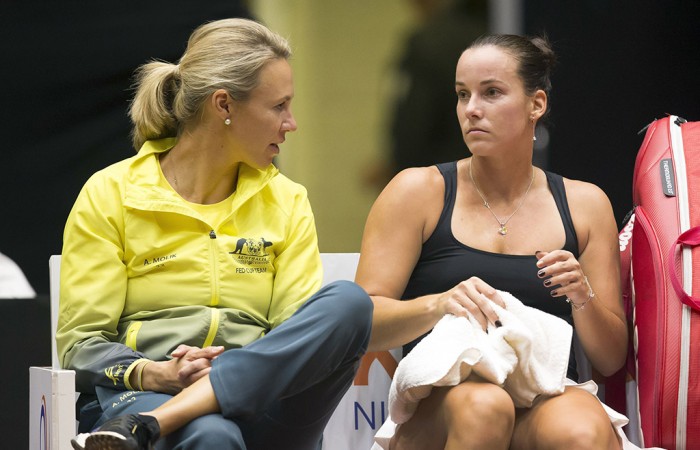 Australia’s Fed Cup World Group Play-off loss to the Netherlands has left the team shell-shocked and searching for answers.

The 4-1 defeat, including losses in both the reverse singles on Sunday as well as a dead rubber doubles match, relegates Alicia Molik’s team to the second-tier World Group II from next season.

After Casey Dellacqua, filling in for the injured Sam Stosur (achilles), succumbed to Dutch No.1 Kiki Bertens, Jarmila Gajdosova let slip an early lead to fall 0-6 7-5 7-5 to Arantxa Rus.

Later, the doubles pairing of Dellacqua and Olivia Rogowska went down 6-2 7-6(3) in the dead rubber, confirming Australia’s exit from the World Group for the first time since 2012.

“I’m feeling pretty deflated really,” Molik told AAP. “It’s one of those ones that got away that should never have.

“It’s a big setback because we pride ourselves on being one of the top nations in the world. Everyone is disappointed and we all wish we could’ve had the opportunities back today.

“We need to regroup and come back strong. We can’t sulk.”

It is the Netherlands’ seventh consecutive victorious tie and ends a World Group exile which dates back to 1998.

On paper it appeared a major mismatch, with a strong Australian team boasting three players ranked in the world’s top 50 compared to world No.86 Bertens, who is on a run of four consecutive first-round defeats on the WTA Tour, being the sole Dutch representative in the top 100.

“The Dutch team was exceptional over the weekend,” Molik said.

“Kiki Bertens was a strong leader for their team and pretty much played faultless over the weekend.”

Once again, Bertens wowed the home fans at ‘s-Hertogenbosch in upsetting a more-fancied rival. She crushed world No.44 Dellacqua 6-2 6-3 having dispatched Gajdosova with similar ease the previous day.

“It sucks to lose but, at the end of the day, it’s where we’re at now. It was unfortunate that Sam got injured and things just didn’t go our way this weekend.”

And for the second day running, it looked like world No.217 Rus was going to be the weak link for the home side, before she stormed home for a remarkable comeback victory.

Rus was steamrolled in the first set, and had no answers to Gajdosova’s powerful groundstrokes.

The 27-year-old Gajdosova was up a break in the second and in control before her game deserted her.

She managed to save three match points, two on Rus’ serve, but double-faulted on the fourth to send the Dutch back to the World Group, sparking wild scenes as her teammates ran onto the court to celebrate with the 24-year-old winner.

Australia’s 2016 campaign will start in February, with fellow World Group II nations such as the United States, Poland and Spain.