Australia's Fed Cup team believe they're on track to return to the World Group after a Casey Dellacqua win saved the visitors from an opening-day deficit in their Play-off tie against the Netherlands. 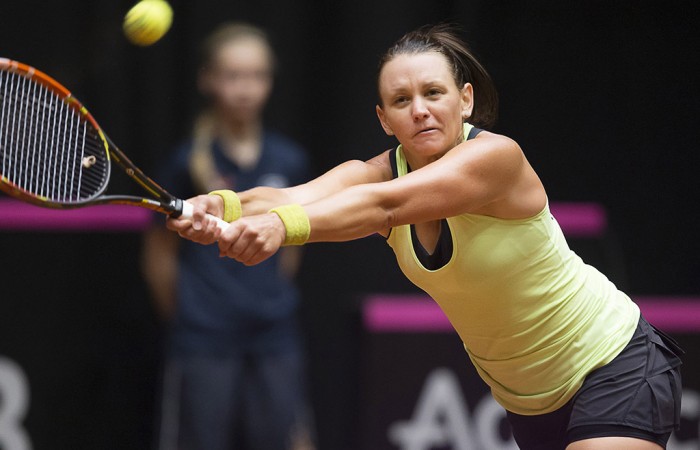 Australia’s Fed Cup team believe they’re on track to return to the World Group after a Casey Dellacqua win saved the visitors from an opening-day deficit in their Play-off tie against the Netherlands.

Dellacqua’s crucial 7-5 6-3 win over lowly-ranked Arantxa Rus levelled the tie at one rubber apiece, after Jarmila Gajdosova’s surprise defeat to Dutch No.1 Kiki Bertens on Saturday.

On what shaped as a horror day for the Australians in ‘s-Hertogenbosch, top-ranked Sam Stosur was a game-day withdrawal due to an Achilles complaint and remains unlikely for Day 2.

Dellacqua is preparing to take her place again in the reverse singles and says she and Gajdosova need to assert their dominance over their less-fancied rivals.

“Jarka (Gajdosova) and I are both ranked top 50 in the world and I think we have to take that into tomorrow and know that we are the better players,” Dellacqua told AAP.

Dellacqua, not a renowned claycourter and whose significant career success has ben achieved largely on hard courts, was imperious early against Rus.

Dictating play, varying her strokes and showing off dazzling footwork, she raced out to a 3-0 lead, a buffer that grew to 5-1 when Rus couldn’t contend with the constant pressure being applied by the Australian.

“I came out all guns blazing and I think I surprised myself a little bit,” Dellacqua said.

Yet with the first set finish line in sight, the Aussie pressed while Rus settled, and, riding a wave of hometown support, the Dutchwoman reeled off four straight straight games.

Admirably, Dellacqua didn’t panic; she played a settling 11th game to hold for 6-5, and then benefitted from a raft of wild Rus errors to pocket the first set.

Despite falling behind a break of serve early in the second to trail 1-2, Dellacqua then won five of the next six games to seal an important victory.

It was a relief for team captain Alicia Molik.

“Jarka will be all the better for having a match today. Casey should be riding high on a lot of adrenalin. She has so much to be proud of. I think it will be a real springboard for tomorrow.

“It’s a level that I would be happy for Casey to hold (on Sunday). I don’t think she has to go up a level for Bertens.”