Kiki Bertens has defeated Jarmila Gajdosova in straight sets to put the Netherlands 1-0 up in their World Group Play-off tie against Australia. 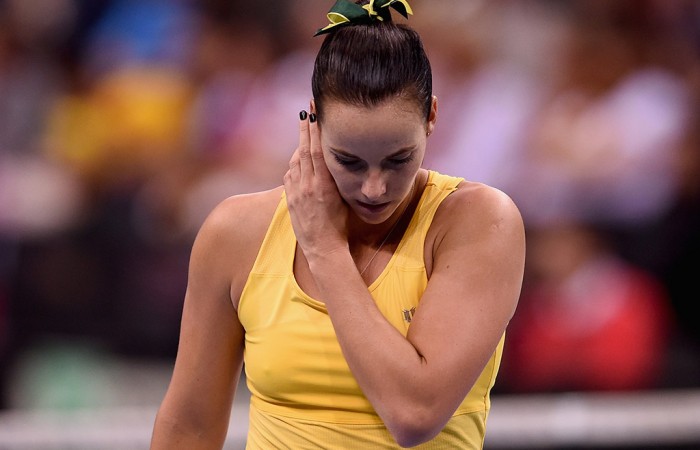 Kiki Bertens has defeated Jarmila Gajdosova in straight sets to put the Netherlands 1-0 up in their World Group Play-off tie against Australia.

The Dutchwoman won 6-1 6-3 in one hour and six minutes to give the hosts the perfect start on the indoor clay court in ‘s-Hertogenbosch.

Although it was an upset on paper – with Gajdosova ranked almost 40 places higher than Bertens – the Australian had not played competitively in a month due to illness, and the rust showed.

As Bertens proved a solid, focused adversary, Gajdosova could barely land a ball in the court in the rapid opening set, which flew by in just 22 minutes.

Soon she was trailing 6-1 3-1, as the 86th-ranked Bertens steamed towards the finish line.

At that point in the match, the Dutchwoman’s unforced error count remained in single digits.

Yet in a torrid fifth game, Gajdosova finally got her teeth into the match. Some loose errors and a double fault from Bertens indicated that some cracks were appearing in her game, and Gajdosova capitalised, breaking serve on her fifth opportunity and getting the set back on serve.

She then levelled at 3-3 in the following game.

But two games later, the Aussie threw in a disastrous game, falling behind 0-40 and getting broken to trail 3-5.

Serving for the match proved tough for Bertens; she could only watch as Gajdosova smacked an off-forehand winner to erase her first match point.

But her big first serve came to the fore; she fired her eighth ace on a subsequent match point to seal victory.

“She’s an aggressive player. I never want her to go out on the court and be passive and reactive.

“Tomorrow is about sharpening up on the finishing shots. She can draw on a lot of experience and belief. She’s played so many Fed Cup matches.

“Jarka will have so much more confidence than Arantxa (who’s) a lot younger and less experienced.”