Jarmila Gajdosova will open Australia’s Fed Cup campaign against the Netherlands this weekend, with Sam Stosur also in singles action. 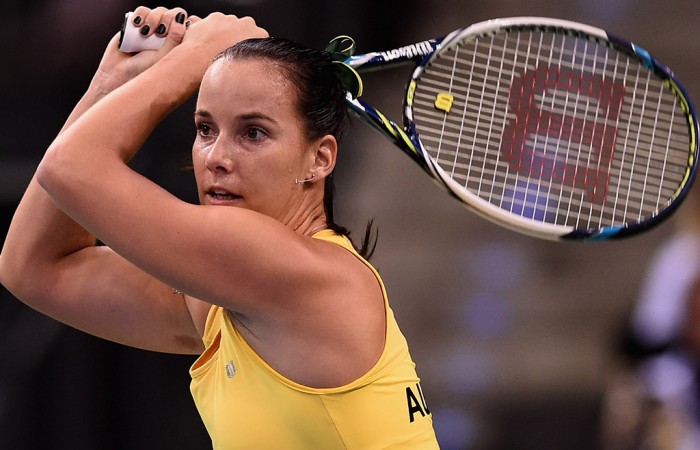 Jarmila Gajdosova will open Australia’s Fed Cup campaign against the Netherlands in the city of ‘s-Hertogenbosch this weekend.

At a ceremony staged in the city’s 14th-century town hall, Australia’s Fed Cup captain Alicia Molik named Sam Stosur and Gajdosova as No.1 and No.2 singles players, with Gajdosova drawn to play Dutch No.1 Kiki Bertens, ranked world No.86 in the opening rubber on Saturday.

Stosur will step up next against Dutch No.2 Arantxa Rus, ranked 217th.

In the reverse singles on Sunday, Stosur matches up against Bertens and Gajdosova will play Rus.

Gajdosova and Casey Dellacqua – who reached the doubles final on green clay in Charleston last week – will team up for the doubles rubber on Sunday against Richel Hogenkamp, ranked No. 124 and Michaella Krajicek, ranked 441st yet is the world No.23 in doubles.

Australia holds an enviable 8-1 record over the Dutch team. Captain Alicia Molik and Fed Cup coach Nicole Pratt were both members of the winning Australian team in the last encounter between the two nations, in Wollongong in 2002.

“I’m glad we’re in that winning position and it would be nice to give them (the Dutch team) a bit of a reminder of that,” Molik said.

“I think the danger is that athletes and tennis players can produce pretty special things when they represent their countries in Fed Cup and Davis Cup, and we need to be wary of that. They’ve got absolutely nothing to lose.

“Despite our team being strong and having better players, we can’t underestimate their abilities as well.”

“But I do know our team has put in a tremendous amount of work preparing for this weekend. Sam, Casey, Jarka and Olivia (Rogowska) are an incredibly united team. They’ve worked together so well, and supported each other every day. I’m very proud of the effort they’ve put in.”

The Fed Cup by BNP Paribas World Group Play-off will be broadcast nationally on 7TWO (see details below), hosted by Todd Woodbridge and Nicole Bradtke.

Check out our TV Guide for telecast information, and for behind-the-scenes coverage and live updates, follow @TennisAustralia on Twitter.