In the latest issue of "quick hits", we bring you news of John-Patrick Smith's latest Challenger success, Aussie updates from Miami, and Lleyton Hewitt's next move. 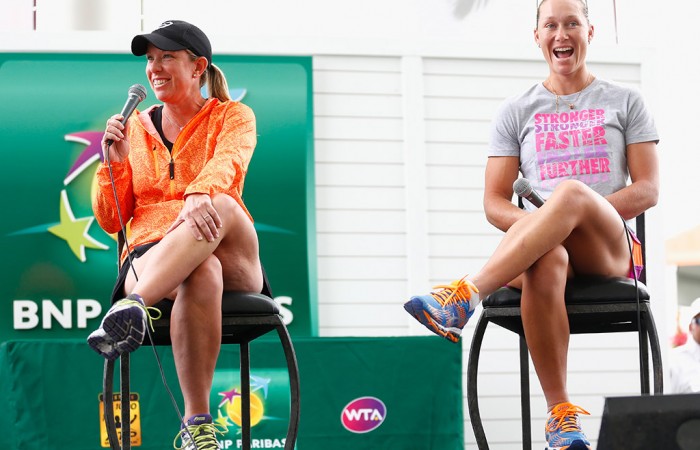 In the latest issue of “quick hits”, we bring you news of John-Patrick Smith’s latest Challenger success, Aussie updates from Miami, and Lleyton Hewitt’s next move.

Queenslander John-Patrick Smith is back in the winners’ circle with his victory over the weekend at the Drummondville Challenger in Canada. It was the 26-year-old’s first title in two years, and his first at ATP Challenger level in three. All five of the left-hander’s career titles have come on North American soil. “Thanks for the great week @ChallengerBN! Incredibly well run tournament! Appreciate all the nice tweets #grateful,” he wrote on Twitter.

Staying in North America, Sam Stosur enjoyed a reunion of sorts at Indian Wells last week when she paired up with Lisa Raymond, the partner with whom she enjoyed enormous success in the mid 2000s – the pair won two Grand Slam titles – and co-owned the No.1 ranking. The duo stormed into the semifinals, where it took top seeds and eventual champs Martina Hingis and Sania Mirza to stop them. Despite the loss, Stosur and Raymond seemed to enjoy their time competing together in the Californian desert, as the picture above snapped during a tournament fan event showed.

Speaking of Stosur, she will be seeded 23rd this week in Miami, the second straight prestigious two-week, joint ATP-WTA event in the United States this month. Fellow Aussie Casey Dellacqua is seeded 32nd; as seeds, both Sam and Casey receive first-round byes. Joining them in the draw are compatriots Ajla Tomljanovic and Daria Gavrilova, as well as four more Aussies in qualifying (the men’s singles main draw has yet to be conducted). Stay tuned for our full Miami draw preview on tennis.com.au in the coming days.

One Aussie, unfortunately, won’t be joining them. Jarmila Gajdosova, in a succession of recent tweets, announced that she was withdrawing from the Miami Open.”Missed the tournament pass [sic] couple years but my health is still not where it should be and I feel like that I wouldn’t be able to compete as I would like to and I feel like I haven’t been able to prepare the way I would like to. So I will take some more time off get better and get ready for Charleston in South Carolina and for Fed Cup tie.”

Looking ahead to the grasscourt season, Lleyton Hewitt has revealed that he will add the ATP-WTA event in ‘s-Hertogenbosch to a growing grasscourt season that will also feature appearances at Queen’s and Wimbledon. “Excited to be starting my final grasscourt season @TopshelfOpen Rosmalen. Bring it on! @CrabbJaymon #road2SW19,” he tweeted on Monday.