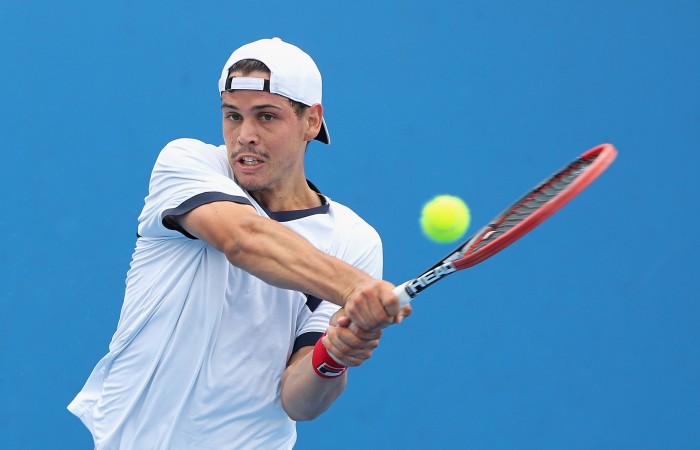 After reaching the semifinals at the Challenger event in Happy Valley last month, 22-year-old South Australian Bolt has continued his fine form, making short work of American Bjorn Frantangelo 6-3 6-2 – in the process sending down 13 aces and not facing a single break point.

“I feel like that run in Happy Valley has given me the confidence to have another good one here [in Burnie],” Bolt said. “I’ve got the belief in my game now to feel like I can beat the guys at these tournaments.”

Brimming with confidence and justifiably so, he added, “I feel like I’m definitely playing the tennis to win this tournament.”

Meanwhile, following a quiet 2014, Barton has had a resurgent week. After making the main draw as a lucky loser, the Sydney-based 23-year-old has made the most of his good fortune, racking up a win over South Australian Luke Saville in the opening round before accounting for the vastly more experienced West Australian Matthew Ebden 6-2 6-4 in their quarterfinal.

Gold Coast’s Ben Mitchell has been equally impressive; defeating his countryman James Duckworth – the top seed in Burnie – in an entertaining three sets on Thursday before running over the top of China’s Ze Zhang 6-2 6-0 in just 47 minutes.

“All of us young Aussie guys are starting to make our mark on the tour and it’s great to see three Aussie guys in the semis,” Bolt said.

He will next take on Mitchell in an all-Australian semifinal.

“We know each other really well but we haven’t played for a few years,” Bolt said of his compatriot. “A lot of things have changed since then.”

In the other semifinal, Barton, currently ranked world No.609, faces the only remaining seed in the tournament, eighth-seeded Korean Hyeon Chung, who accounted for up-and-coming Brit Kyle Edmond on Friday.