There are plenty of Aussies in action at the Hobart International on Monday including Casey Dellacqua who is building towards her Australian Open campaign. 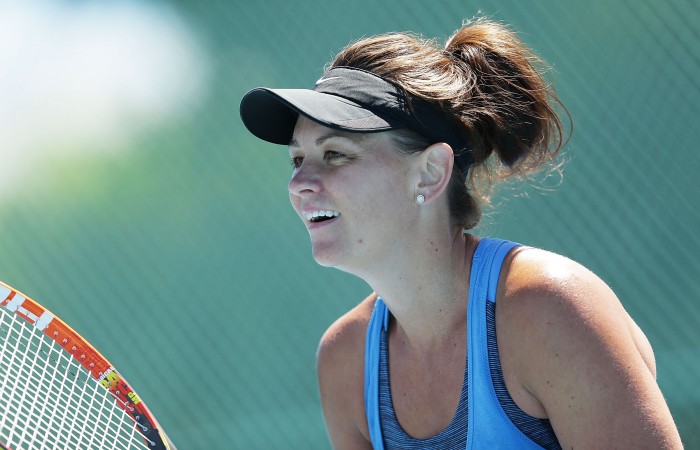 There’s no denying it: Casey Dellacqua would rather have won those three Hopman Cup matches in Perth before heading to the Hobart International.

But for the tournament’s top seed there were plenty of positives to be drawn from her week in Western Australia – not least facing three top pros with very different games so early in the season.

That’s the beauty of Hopman Cup, Dellacqua explained. No other competition offers the guarantee of three singles matches, win or lose – which was central to the world No.29’s decision to play for Australia.

“I played some really good tennis in Perth,” the 29-year-old said on her arrival at the Domain Tennis Centre on Sunday. “I played girls ranked quite highly and that’s the kind of matches I want early in the season when I haven’t played for a couple of months.”

Training took precedence over competition late in 2014, a season that saw Dellacqua’s ranking continue its ascent to the world’s top 30 as she won matches at all four Grand Slams.

The focus remains on building towards the Australian Open in these early weeks of 2015. Heather Watson, Agnieszka Radwanska and Alize Cornet may have collected wins, but Dellacqua collected court time and is adamant she got what she wanted out of her week in Perth – the chance to get match-sharp ahead of the Australian Open.

“The same thing goes this week,” Dellacqua added. “It’s just about preparing for each match the best I can and hopefully I start to feel better and better out on the court and by the Australian Open I’m really starting to play some good tennis.”

Still, there’s nothing worse than getting into a losing habit, and Dellacqua – top-ranked at a tournament for the first time in her career in Hobart – knows the challenge she faces in the first round, against American Lauren Davis.

“She’s a really tough opponent, a really good mover and gets a lot of balls back,” Dellacqua said of the world No.54. “I’m going to be up for a real challenge and I’m going to have to play good tennis throughout the match to win this one.”

Monday’s afternoon session will feature all four of the Australians in the Hobart International draw – including Ajla Tomljanovic, who will play under the Croatian flag in Tasmania but for Australia at Melbourne Park.

It promises to be a busy day at the Domain Tennis Centre with top-ranked players in first-round action on all three courts. The all-American showdown between Alison Riske and Christina McHale kicks off the action on Court Events Tasmania, which will also play host to Sloane Stephens and Taylor Townsend’s doubles debut.

British No.1 Watson will open her campaign with a tricky encounter with Magdalena Rybarikova on Court Heart FM after Croatia’s Mirjana Lucic-Baroni and Bojana Jovanovski of Serbia have faced off.