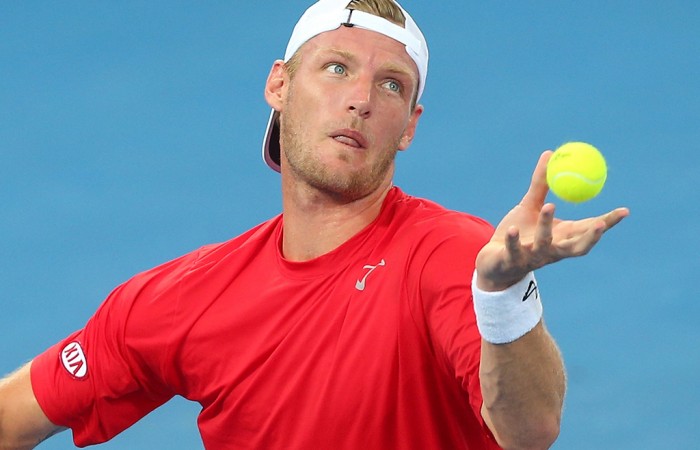 But Groth says he will have to fight fire with fire against big-hitting Canadian third seed Milos Raonic in Friday’s Brisbane International quarterfinal.

Groth’s early claim to fame was unleashing a 263.4km/h thunderbolt in a 2012 Challenger tournament – the world’s fastest recorded serve.

These days it is the speed of the 27-year-old Victorian’s world ranking rise that is turning heads.

That looks set to continue after the current world No.85 booked a second straight Brisbane International quarter-final berth.

Groth came down from the emotional high of thrashing defending champion Lleyton Hewitt to hold out Polish qualifier Lukasz Kubot 6-4 6-7 (2-7) 7-6 (7-3) in a two-and-a-half-hour, second-round epic on Thursday.

Asked if he could better Thursday’s match high 232km/h effort, Groth said: “I’m not trying to hit it fast, I’m trying hit it in.

“To be honest, right now I’m not worried about hitting the fastest serve.

Yet Groth said there would be no prizes for guessing what to expect in what looms as an explosive quarter-final against world No.8 Raonic.

The third seed brushed aside Kazakhstan’s Mikhail Kukushkin in their second-round clash on Thursday, thundering down 17 aces and never facing a break point in the 6-3 6-4 win.

Groth said it was like “playing against myself” facing world No.177 and former Wimbledon quarter-finalist Kubot.

And it seems it will be more of the same on Friday.

“Yeah, I think it’s pretty obvious what to expect,” Groth said of his match-up with Raonic.

“You have got two of the biggest servers on tour at the moment.

“Hopefully I can get a few more of his back than he can get of mine.”

Raonic’s booming serve inspired a breakthrough 2014 in which he made the Wimbledon semi-finals and French Open quarters.

He served the second most aces on tour last year – 1107 of them – but still looked to improve in the off-season.

And it seems it is paying off after losing just eight points in 10 service games in his win, which followed a first-round bye.

“We definitely thought I could do a lot better with my serve, so we spent a lot of time this off season on it,” said Raonic.

The Groth-Raonic clash will start Friday’s action ahead of Australian Bernard Tomic’s quarter-final with second seed Kei Nishikori of Japan.

James Duckworth made it three Australians in the last eight by defeating Finland’s Jarkko Nieminen 4-6 7-6 (7-5) 6-3.

The Sydneysider will play the winner of Thursday’s late match between Roger Federer and Brisbane product John Millman.