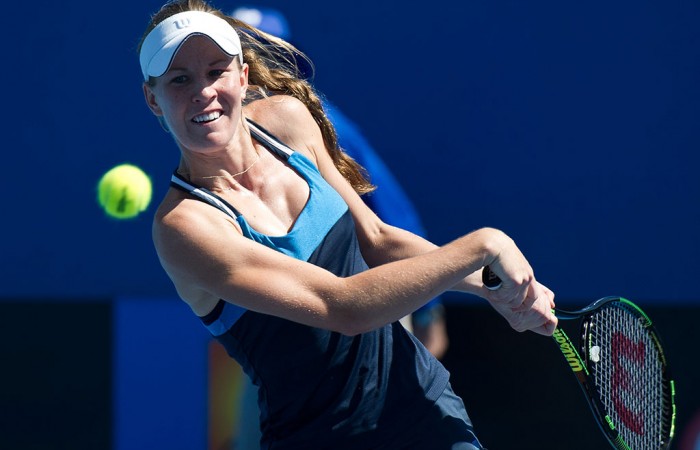 Even Rogowska herself couldn’t fault her performance, describing her opening match as “pretty much perfect.”

The 23-year-old’s precision hitting and ability to quickly change the direction of the ball often forced Mendez well behind the baseline, which in turn enabled Rogowska to continue building momentum throughout the match.

“I think I executed my game plan really well today, and I’ve been working on some things in the off season and it showed on the match court today,” she said.

Mendez, a highly touted junior who spends much of her time training in Spain, displayed glimpses of her ability, but was unable to keep pace with her more experienced opponent.

“I was extra prepared today, sometimes these juniors come out swinging and have nothing to lose and I have the pressure, expecting to win,” said Rogowska.

Rogowska, winner of the Play-off in 2011, achieved a career-high ranking of No.102 in 2014 and while she is determined to build on this achievement, she is also wary of getting too caught up in the numbers.

“Last year I freaked out about some ranking points, but this time around I’m just trying to focus on forehands and backhands and hopefully the points come,” she said.

In the quarterfinals Rogowska will face eighth seed Alison Bai who toughed out a lengthy battle with Isabella Holland.

With a final score of 1-6 6-2 7-5, Bai was pleased with her ability to stay mentally strong in the crucial moments of the deciding set.

“I was believing in myself and focusing on the basics, I was saying at the end if I’m going to lose this match I’m going to go out swinging and not walk off the court with any regrets,” said Bai.

In the first major upset of the tournament, 16-year-old Naithka Bains has advanced to the second round after Anastasia Rodionova retired injured when down 6-4 3-1.

It was clear from the outset that Bains was not intimidated by her more experienced opponent, her consistency and athleticism helping her to combat Rodionova’s power.

Although Bains would no doubt have preferred to close out the match on her own terms, she will enter her second round match with a huge boost of confidence.

In other results on Tuesday, Maddison Inglis upset No.7 seed Alexandra Nancarrow, who looked a shadow of the player who rose more than 500 places in the rankings during a stellar 2014 season on the ITF circuit in Europe.

Appearing still hampered by an ankle injury sustained during the Asia-Pacific Tennis League, Nancarrow fell 6-3 6-1 to the talented 16-year-old, who goes on to face Bains in the quarterfinals.