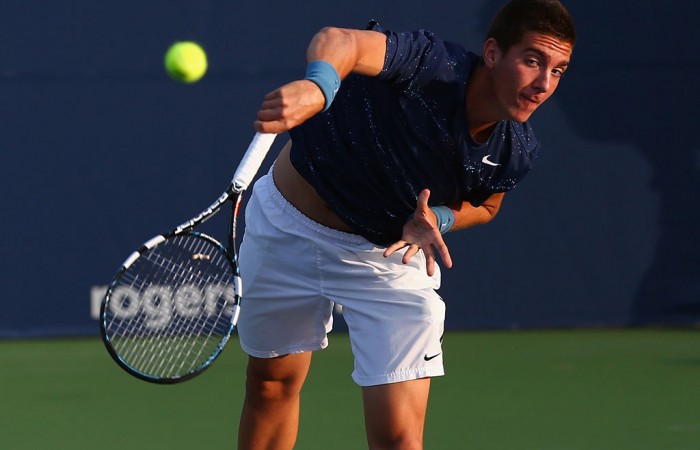 Australian teenager Thanasi Kokkinakis has cracked the world’s top 200 after a successful week at the ATP Challenger event in Vancouver.

After reaching the quarterfinals in the Canadian city before falling to Brit James Ward, Kokkinakis rose 17 places to world No.199.

Jason Kubler nearly made it 11 after he rose 33 places to a career-high ranking of No.202.

The Queenslander’s latest rise came thanks to his victory at the ITF Futures event in Fano, Italy.

It was his third Futures title this season, and continues an impressive return to form; just nine months ago, Kubler was ranked No.567.

Maverick Banes was another recent winner on the Futures circuit, claiming the crown in Xativa, Spain.

It came the week after he reached the final in nearby Denia, Spain, and contributed to his rise of 24 places to a career-high mark of world No.381.

Meanwhile, Jarmila Gajdosova’s victory at the $100,000 ITF event in Vancouver has put the 27-year-old on the cusp of a return to the world’s top 100.

The former world No.25 leapt 37 places to 103rd on the WTA rankings, just four months after she dipped to No.334 as she struggled to regain her form following a long battle with mononucleosis in 2013.

Her latest rise pushes her ahead of the 104th-ranked Olivia Rogowska to become the third-ranked Australian female, behind Sam Stosur (No.21) and Casey Dellacqua (No.31).

Also enjoying rises this week were Monique Adamczak – who moved nine places up to 312th following her second-round run at the $50,000 ITF event in Wuhan – and Alexandra Nancarrow, whose continued success at $10,000 ITF level tournaments in Europe moved her up 15 spots to a career high of No.467.