Ash Barty and Casey Dellacqua have advanced to the quarterfinals of the women's doubles event at Roland Garros with a come-from-behind victory over Kristina Mladenovic and Flavia Pennetta. 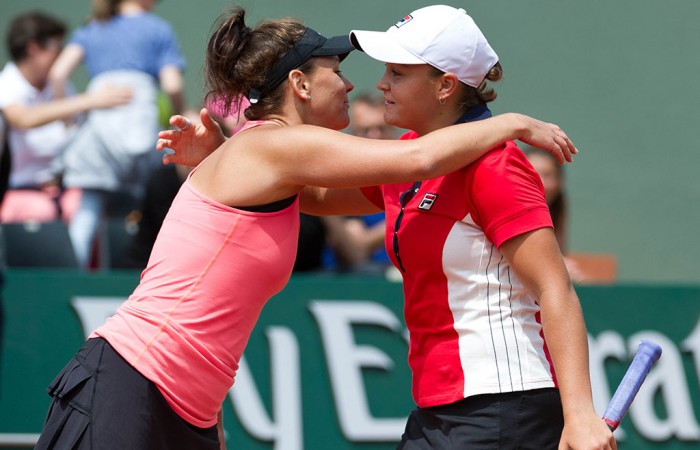 Ash Barty and Casey Dellacqua have advanced to the quarterfinals of the women’s doubles event at Roland Garros with a come-from-behind victory over Kristina Mladenovic and Flavia Pennetta.

The Australian duo, seeded seventh in Paris, beat the French-Italian 4-6 6-2 6-1 to move through to the last eight, where they will take on second seeds Sara Errani and Roberta Vinci.

Barty and Dellacqua reached the final at three of the Grand Slam events of 2013 – their one sub-par performance came at the French Open, where they lost in the opening round.

But a victory the week before Roland Garros at the WTA event in Strasbourg filled the pair with confidence as they entered the claycourt Grand Slam.

They are currently riding a seven-match winning streak.

“Ash and I didn’t do so well here last year … and we were pretty disappointed with that result. So this time around we played Strasbourg because we wanted to get some claycourt doubles under our belts, and we won that title which was great coming into the French Open,” she said.

“Our matches this week have been really good, we’ve played some really good doubles and so we’re looking forwrad to our quarterfinal match. We get to play Vinci and Errani who obvisouly are one of the best teams in the world, but it’s good to get another shot at them; we lost to them in the final at the Australian Open in 2013.

“Obviously it’s their preferred surface … we’ll have to be ready for a tough match and be on our game and hopefully we can be the better team on the day and come out with the win.”

Barty and Dellacqua will face the No.2 seeds on Tuesday at Roland Garros.

Another Australian, Sam Groth, is also into the doubles quarterfinals with partner Andrey Golubev of Kazakhstan; he’ll also play next match on Tuesday.