The fifth seeded doubles pairing of Casey Dellacqua and Ashleigh Barty advanced to the second round of the 2014 Australian while youngsters Nick Kyrgios and Thanasi Kokkinakis put is gallant displays in their second round appearances. 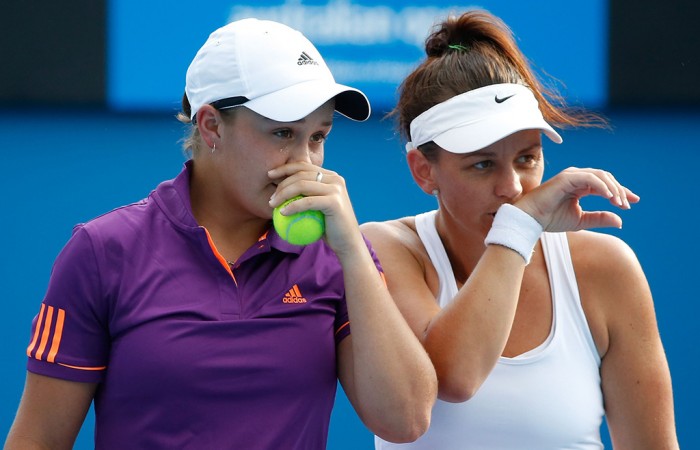 The fifth seeded doubles pairing of Casey Dellacqua and Ashleigh Barty have advanced to the second round of the 2014 Australian open with an emphatic 6-1 6-1 victory over Russian Alexandra Panova and Czech Karolina Pliskova.

The Australian duo took just 52 minutes to take the match in a clinical display.

Despite two sensational efforts, the news was not quite as good in the men’s singles.

17-year-old Thanasi Kokkinakis faced an uphill battle when he took on  world. No.1 Rafael Nadal on Rod Laver Arena.

Kokkinakis put in a display way beyond his years and experience, eventually going down to “Rafa” 6-2 6-4 6-2.

Eairlier, Olivia Rogowska was the first Australian to take the court in her encounter with Ukrainian Elina Svitolina.

Rogowska fought hard in a seesawing match but the 22-year-old Aussie could not quite get over the line against the world No.47, eventually going down 6-4 7-5.

The all-Australian doubles pairing of Luke Saville and Matt Reid also lost their first round match. The good news from that encounter is that one of their opponents, John Peers, was also a local.

It was slso bad news for the female Australian doubles combination of Tammi Patterson and Anastasia Rodionova. They were defeated by Cara Black of Zimbabwe and Sania Mirza of India 6-1 6-4.