UPDATE: Casey Dellacqua and Ash Barty have kept their fabulous Wimbledon run going with an upset win over No.2 seeds Andrea Hlavackova and Lucie Hradecka. 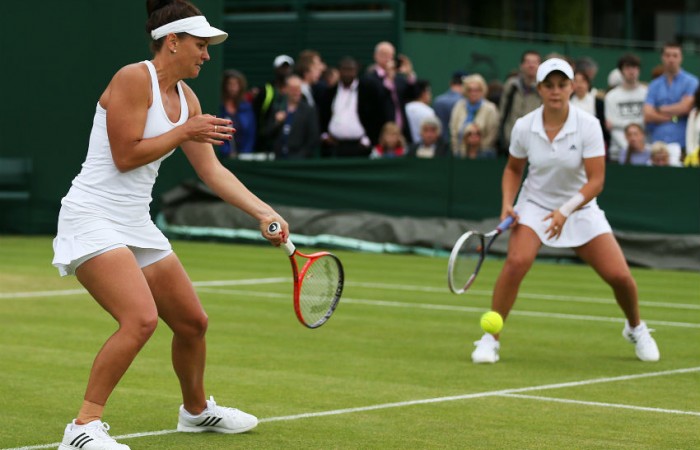 Casey Dellacqua and Ash Barty have kept their fabulous Wimbledon 2013 run going with an upset win over second seeds Andrea Hlavackova and Lucie Hradecka on Wednesday.

Despite dropping the opening set of their women’s doubles quarterfinal on No.2 Court, the 12th seeds roared back to complete a 2-6 6-2 6-4 triumph.

It sends the Aussies into the semifinals of The Championships, where they will face No.7 seeds Anna-Lena Groenefeld and Kveta Peschke.

Should they win, it would be their second Grand Slam final of the year after they won all through to the title match at the Australian Open as a wildcard pairing in January.

It was a thrilled Dellacqua and Barty who clinched victory today when Barty stabbed the winning volley, ending the run of last year’s Wimbledon finalists.

“So pumped to be into the semi-finals of the doubs here at Wimbledon with @ashbar96, bring on Friday!!!” Dellacqua tweeted following the match.

Hlavackova and Hradecka, both from the Czech Republic, also won silver at the London 2012 Olympics at Wimbledon, demonstrating their prowess on the lawns.

Barty continued her stellar form by combining with compatriot John Peers to win through to the mixed doubles quarterfinals.

Dellacqua, meanwhile, saw her run in the mixed event with American Scott Lipski come to an end at the hands of No.3 seeds Nenad Zimonjic and Katarina Srebotnik.