Wimbledon: Aussie contingent to do it tough

Lleyton Hewitt and Bernard Tomic have drawn tough opening round opponents at the All England Club, while Sam Stosur sits in the same section as Serena Williams. 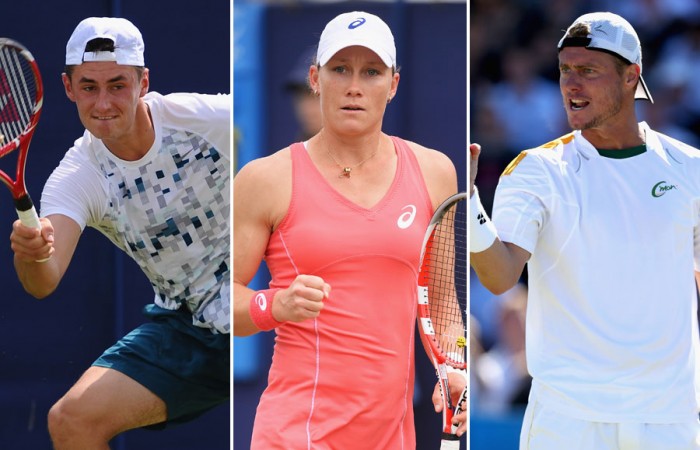 In a tough draw for the Aussies at Wimbledon, three of the men’s six-strong contingent have drawn seeded players in the opening round.

On the women’s side, No.14 seed Sam Stosur has drawn 119th-ranked Slovak Anna Schmiedlova, while top seed Serena Williams looms in the last 16.

With six players in the men’s draw, it is Australia’s largest representation at the All England Club since 2003, the year that Mark Philippoussis progressed to the final before falling to Roger Federer to give the Swiss his very first Grand Slam title.

Yet it will be a tough ask for an Aussie to repeat that feat in 2013.

The two most in-form players of the group – Lleyton Hewitt and Bernard Tomic – have drawn No.11 seed Stanislas Wawrinka and 21st seed Sam Querrey respectively.

Aussie No.1 Tomic will be hoping to carry into Wimbledon the form he displayed this week in Eastbourne, which took him to the quarterfinals – his best tournament result since January.

He finds himself against the towering Querrey, the American serving machine whom Tomic beat in the only prior meeting in the second round at Australian Open 2012.

Tomic has landed in the same section as No.9 seed Richard Gasquet and seventh seed Tomas Berdych, whom he could meet in the third and fourth rounds respectively.

Hewitt, who made the semifinals in Queen’s last week, helped create one of the biggest blockbusters of the opening round when his chip was drawn alongside Wawrinka, who at world No.10 is at his highest ranking in five years.

The 32-year-old Hewitt has an unfortunate history of drawing big names early in the majors but will fancy his chances against the Swiss, whose best results at Wimbledon are fourth round appearances in 2008 and 2009.

Hewitt has landed in the same section as Rafael Nadal, the No.5 seed who looms as a potential fourth-round foe.

Wildcard Matt Ebden, who won the Nottingham Challenger on grass two weeks ago, finds himself taking on Kei Nishikori, the 12th-seeded Japanese player who currently sits at a career-high ranking of No.11.

In their only prior meeting in the second round at Australian Open 2012, Ebden led Nishikori by two-sets-to-love before falling in five.

One player happy to finally catch a break at a Grand Slam is Marinko Matosevic.

The Victorian, Australia’s second-ranked player at No.66, faces Frenchman Guillaume Rufin, whom he beat in their only prior meeting at, notably, Wimbledon qualifying in 2011.

After drawing Marin Cilic (US Open and Australian Open) and David Ferrer (Roland Garros) in his past three major outings, Matosevic will hope to improve on a Grand Slam main draw record that stands at 0-9 when he takes on Rufin, ranked No.89.

After also qualifying for Roland Garros just a few weeks ago, Duckworth takes on fellow qualifier Dennis Kudla, while Reid finds himself up against Czech Radek Stepanek, the former world No.8 who is now ranked 48th.

Stosur will attempt to progress beyond the first round at Wimbledon for just the second time in four years when she takes on the little-known Schmiedlova. The pair have never before met.

Should Stosur win that battle and continue to progress she faces a projected third round match against German Sabine Lisicki, the 23rd seed who reached the Wimbledon semis in 2011 and quarters in 2012, and with whom Stosur combined to reach the ladies’ doubles final in 2011.