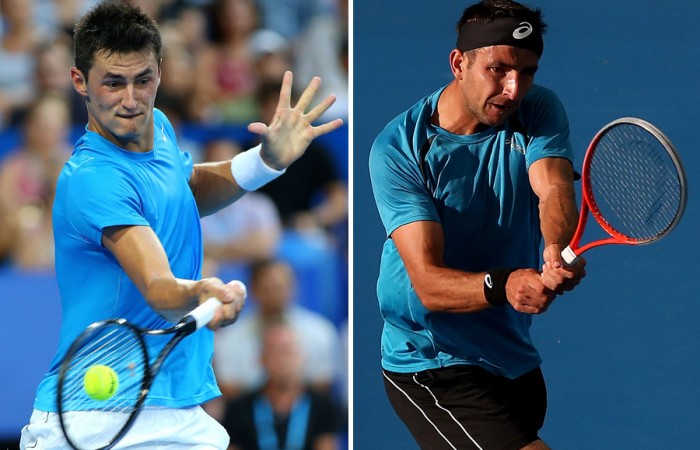 The Australian No.1 ranking will go on the line when top dog Marinko Matosevic takes on the resurgent Bernard Tomic in a high-stakes first-round encounter at the Apia International Sydney.

Bragging rights will also be up for grabs after Matosevic literally drew Tomic’s name out at Saturday’s draw for the Australian Open lead-up at Sydney Olympic Park.

The marquee match pits the 49th-ranked Matosevic, the ATP’s most improved player last year, against one of the hottest performers on tour in Tomic, who claimed the prized scalp of world No.1 Novak Djokovic during his unbeaten singles charge at the Hopman Cup in Perth.

“I wish I didn’t pick that after his run at the Hopman Cup, but you’ve got to play who you have to play,” Matosevic said.

“Definitely it’s an opportunity. He’s been top 30 and he’s started the year good again and he always plays well in Australia.”

Having already been rocked by the withdrawal of the tournament’s top two seeds, French duo Jo-Wilfried Tsonga and Richard Gasquet, officials were also left cursing their wretched luck at the draw.

They had been hoping Matosevic and Tomic would both make a run at the Australian Open lead-up event.

Instead one will crash out on Monday.

Matosevic could relinquish his top Australian ranking to Tomic in Sydney, but insisted the heat was elsewhere heading into his showdown with his Davis Cup teammate and part-time doubles partner.

“I think all the pressure is on Bernard and Lleyton (Hewitt) coming into the Aussie summer, and Sam (Stosur) even more so,” he said.

Tsonga, meanwhile, was to be top seed in Sydney but suffered a hamstring injury while representing France in the Hopman Cup on Friday night.

The 2008 Australian Open runner-up was to have been replaced as No.1 seed by Gasquet before the world No.10 too pulled out citing personal reasons.

American John Isner is the new No.1 seed.

Aside from Matosevic and Tomic, the other Australians in the men’s draw fared reasonably well.

Stosur, sixth seed in the women’s event, opens up against China’s Jie Zheng.