Pat Rafter has lauded Lleyton Hewitt as the heart and soul of Australia's Davis Cup team as the veteran baseline warrior celebrates yet another milestone. 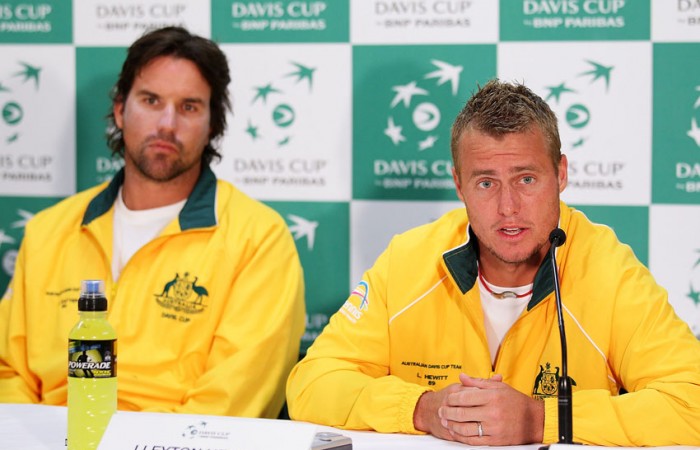 Pat Rafter has lauded “full on” Lleyton Hewitt as the heart and soul of Australia’s Davis Cup team as the veteran baseline warrior celebrates yet another milestone.

Already the most prolific singles winner in Australian Davis Cup history, Hewitt will become the country’s most-capped player in next week’s World Group play-off against Germany.

The 31-year-old former world No.1 will be contesting his 33rd tie in the do-or-die claycourt fixture, surpassing the record he shared with retired doubles ace Todd Woodbridge.

Hewitt made his Cup debut alongside Rafter as an 18-year-old back in 1999.

Since then, he has chalked up a record 49 match wins – 38 in singles and 11 in doubles – and helped Australia claim the coveted trophy in 1999 and 2003 during a glorious run of four finals appearances in five years.

Hewitt is now very much in the twilight of his illustrious career, but Australia’s captain said he’d continue picking the dual grand slam champion “for as long as he wants to be around”.

“We know what we’re going to get with Lleyton. His body is holding up well and he’s our go-to man and we need him.

“If we don’t have Lleyton, we lose a lot of the structure of our team.”

Hewitt is now a happily married father of three, but his insatiable appetite for Davis Cup remains undiminished.

“He’s got all the records,” Rafter said.

“That’s a great legacy and his passion is something he always brings to the team as well.

“The other guys in the team feed off that and we’re trying to create a culture and a feeling that Davis Cup is really important for us all.

“For all those players, it can really help their career. It’s a really good bonding tool as well and Lleyton helps bond everyone together.

“He’s full on and that’s what I love about him.”

Australia’s team of Hewitt, Bernard Tomic, Matt Ebden, James Duckworth and Chris Guccione need to beat Germany in the play-off on 14-16 September to gain re-entry to the 16-nation World Group for the first time since 2007.

Since being relegated five years ago, Australia have been frustrated in -against Switzerland (2011), Belgium (2010), Chile (2008) and Serbia (2007) and boycotted another in India in 2009 amid security concerns.