Sam Stosur starts her fourth round match against young American Sloane Stephens as a heavy favourite, looking to continue her great run on Day 8 in Paris. 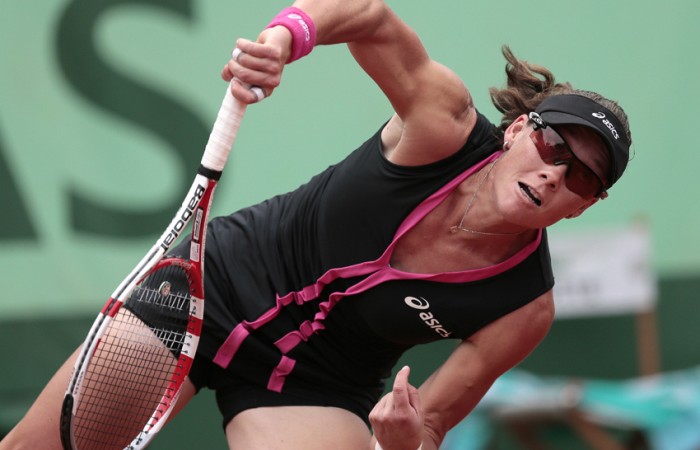 Teenage surprise packet Sloane Stephens is all that stands in the way of Sam Stosur and a potential French Open quarterfinal showdown with world No.1 Victoria Azarenka.

Stosur takes on Stephens in the last match on Court Philippe Chatrier on Sunday – which depending on the length of preceding matches is expected to start about 4am Monday AEST – and admits she has had to assign coach David Taylor to some extra homework in order to study up on the 19-year-old.

“I know that she’s a young American coming up and got a good game,” Stosur said ahead of their fourth-round clash.

“I’ve never played against her, never hit against her. She probably doesn’t have much to lose, so I’ve got to be ready for someone to come out playing well.”

Stephens, ranked 71st in the world, had never won a match in Paris before rolling through the first three rounds without dropping a set.

“My goal coming into the French Open was just play hard,” she said.

“I mean, there’s nothing else you can do. Play hard, fight hard, run every ball down.

“Winning or losing, really, it didn’t matter … I was not going to put any pressure on myself.”

While Stosur is largely in the dark about her flying rival, Stephens is well aware of what to expect from Australia’s 2010 French Open finalist and reigning US Open champion.

“Aggressive baseliner, looking to a lot of forehands coming in,” was the youngster’s assessment.

“It will be good. I’m excited. I love playing here. I have been playing well, so it should be a match.”

Stosur is also yet to lose a set and was highly impressive in her 6-3 6-3 third-round disposal of dangerous Russian Nadia Petrova.

“I’m very pleased with the three matches I have played. I really couldn’t ask for too much more,” the sixth seed said.

Also taking to the courts at Roland Garros on Day 8 will be men’s heavyweights Novak Djokovic, Roger Federer and Juan-Martin Del Potro, as well as women’s world No.1 Azarenka, who takes on Slovakian 15th seed Dominika Cibulkova.

You can catch all the live action on Day 8 at the French Open from 7pm AEST on Fox Sports 3. For more information, see our TV Guide.