Sam Stosur has gained revenge for her last last defeat to Nadia Petrova, blitzing the shellshocked Russian to storm into the second week of the French Open. 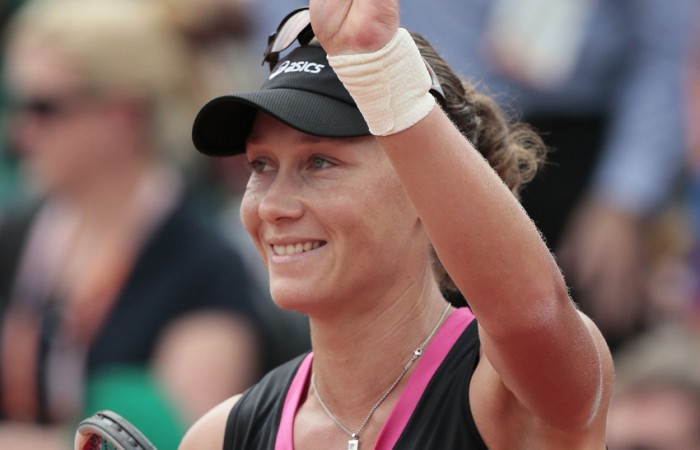 Sam Stosur has blitzed shellshocked Russian Nadia Petrova to storm into the second week of the French Open.

Stosur made light of the heavy conditions and a losing record against Petrova with a 6-3 6-3 rout at Roland Garros on Friday.

Victory vaulted Australia’s 2010 runner-up into a fourth-round match-up on Sunday with American teenager Sloane Stephens, the surprise packet of the tournament.

Stosur trailed Petrova 5-2 in head-to-heads and lost her most recent encounter with the world No.29 at Indian Wells in March.

The sixth seed also likes it hot, but it was a cool and overcast day in Paris.

Never mind the details, though, the US Open champion still managed to produce her best performance of the championships to stride to within a win of a likely quarterfinal blockbuster with world No.1 Victoria Azarenka.

“It’s a great feeling – a place where I wanted to try to get to, to this weekend,” Stosur said.

“I’m very pleased with the three matches I have played. I thought today was very, very solid.

“I really couldn’t ask for too much more. Hopefully it’s going to set me up for the next one. Yeah, we’ll see where things go.”

Stosur showcased her full array of shots on court one – mixing signature forehand rockets with delicate drop shots and one exquisite backhand down the line – to notch her 16th win from 20 claycourt outings in 2012.

Stosur raced to a 4-0 lead before Petrova could even blink.

After opening the match with a ferocious forehand cross, the onslaught continued as Stosur broke Petrova’s first service game with a series of booming winners.

Petrova was simply unable to cope with Stosur’s brute early on and the Australian grabbed the vital double break with a massive off-forehand return.

A brief lapse handed the Russian one break back, but Stosur steadied to coolly serve out the first set.

A seemingly demoralised Petrova gifted Stosur the first of two service breaks in the second set with a double-fault in the third game to fall behind 2-1.

Taking advantage, Stosur finished Petrova off with a cold-blooded backhand winner after one hour and eight minutes.

The Australian title contender is yet to drop a set in the tournament.

Her next opponent, 19-year-old Stephens, had never won a match in Paris before this campaign, but has powered into the last 16 also without dropping a set.