The draw has opened up in the women's event at Roland Garros and Sam Stosur has found her groove as she eyes a second crack at French Open glory. 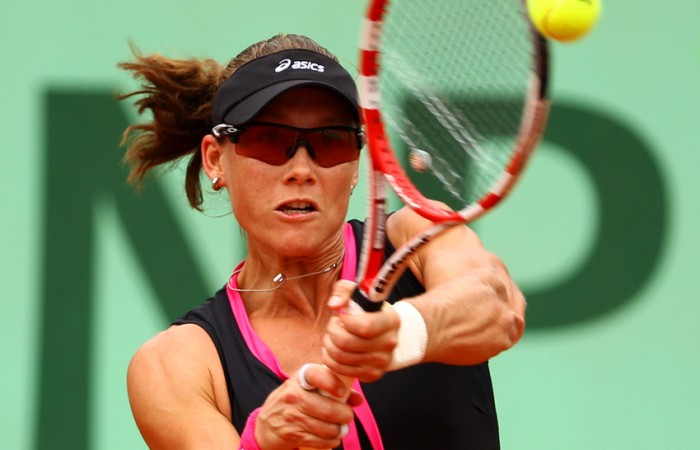 The draw has opened up and Sam Stosur has found her groove as she eyes a second crack at French Open glory.

Stosur faces unseeded American teenager Sloane Stephens on Sunday for a spot in the last eight, just three tantalising wins away from another final at Roland Garros.

The 2010 runner-up blitzed Russian rival Nadia Petrova 6-3 6-3 in her best performance of the championships to storm into the second week of the claycourt major.

“It’s a great feeling – a place where I wanted to try to get to, to this weekend,” Stosur said.

“I’m very pleased with the three matches I have played. I really couldn’t ask for too much more. Hopefully it’s going to set me up for the next one.

“I’m very happy with the way things are going.”

That includes the draw, with third seed Agnieszka Radwanska and former champion Ana Ivanovic both ousted from Stosur’s top half on Friday.

Radwanska and Ivanovic – who had been potential semifinal opponents for the US Open champion – joined pre-tournament title fancy Serena Williams on the scrap heap and Stosur admitted the trophy was well and truly up for grabs.

“I think for sure Serena was one of the favourites to probably go through and maybe win the tournament,” she said.

“Again, you can’t pin anyone into that spot until the last day. So it shows that everyone’s capable of playing very well given their day.

“Everyone’s got to be ready. It’s definitely still open. There are a handful of players playing very well and wanting to try to get through as far as they can and hopefully hold the trophy.”

Stosur knows little about Stephens but will be a hot favourite to end the 19-year-old world No.71′s surprise run to the fourth round after never previously winning a match in Paris.

“I know that she’s a young American coming up and got a good game,” Stosur said.

“I’ve never played against her, never hit against her. She probably doesn’t have much to lose, so I’ve got to be ready for someone to come out playing well.”

Victory over Stephens would likely propel Stosur into a quarterfinal blockbuster with world No.1 Victoria Azarenka, who she has yet to beat in six career meetings.

But she also trailed Petrova 5-2 in their head-to-heads and went down to the one-time world No.3 two months ago at Indian Wells only to make a mockery of her losing record against the Russian on Friday.

Stosur showcased her full array of shots on court one – mixing signature forehand rockets with delicate drops and one exquisite backhand down the line – to notch her 16th win from 20 claycourt outings in 2012.