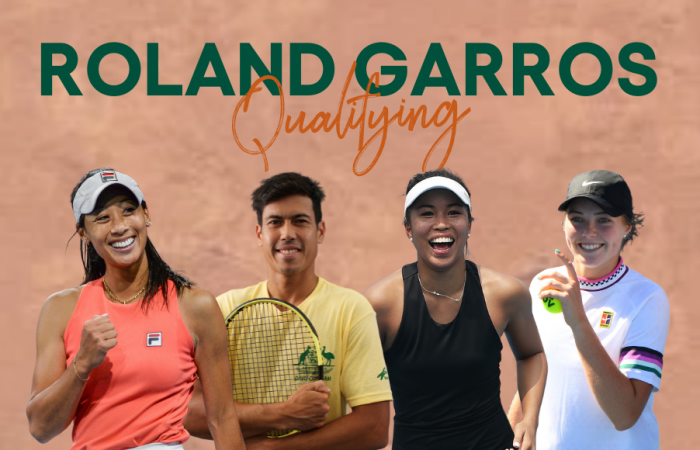 The world No.181’s victory means five Australian women have now advanced to the second round. This is the most to reach this stage in a Roland Garros women’s qualifying singles draw since 1978. Cabrera is set to face [31] Mirjam Bjorklund (SWE) in the second round.

Jason Kubler (AUS) d Riccardo Bonadio (ITA) 6-4 3-6 6-3
Kubler was forced to dig deep in a three-set battle against Italian Riccardo Bonadio, eventually prevailing 6-4 3-6 6-3. World No.161 Kubler has now won 12 of his past 16 matches on clay and this matches the 28-year-old Australian’s career-best result at Roland Garros. Kubler is set to face [6] Radu Albot (MDA) in the second round.

Olivia Gadecki, 20, Queensland
After making her Roland Garros qualifying debut last season as a No.519-ranked wildcard, Gadecki returns in 2022 firmly entrenched inside the world’s top 200. The 20-year-old from the Gold Coast has skyrocketed up the rankings in the past year and is currently at a career-high world No.162. With a win-loss record of 20-7 so far in 2022, Gadecki brings solid form into her third career Grand Slam appearance.
Roland Garros career record: 0-0 (0-1 in qualifying)
Roland Garros best result: Qualifying first round (2021)

Lizette Cabrera, 24, Queensland
After three months on the sidelines, Cabrera made an encouraging return to the tour earlier this month. The world No.181 advanced to an ITF quarterfinal on clay at Prague, providing extra confidence ahead of her fourth Roland Garros qualifying campaign. Cabrera, who achieved a career-high ranking at world No.119 in February 2020, is aiming to qualify in Paris for the first time.
Roland Garros career record: 0-0 (1-3 in qualifying)
Roland Garros best result: Qualifying second round (2018)

Priscilla Hon, 24, Queensland
Hon lists clay as her favourite surface and dreams of winning Roland Garros. In a promising sign, world No.238 Hon scored her second top-100 win of the season on German clay last week. It was her biggest result since upsetting world No.17 Petra Kvitova in a career-best victory at Adelaide in January.
Roland Garros career record: 1-1 (0-2 in qualifying)
Roland Garros best result: Second round (2019)

Jason Kubler, 28, Queensland
The former world No.1 junior is making his fourth Roland Garros qualifying appearance – and first since 2019. Kubler, a former world No.91 and winner of an Australian Pro Tour title on clay earlier this season, is currently ranked No.161. This is his highest position since April 2019. Kubler, who lists clay as his favourite surface, made an ATP Challenger semifinal appearance in Croatia last week and has won 11 of his past 15 clay-court matches.
Roland Garros career record: 0-0 (1-3 in qualifying)
Roland Garros best result: Qualifying second round (2019)