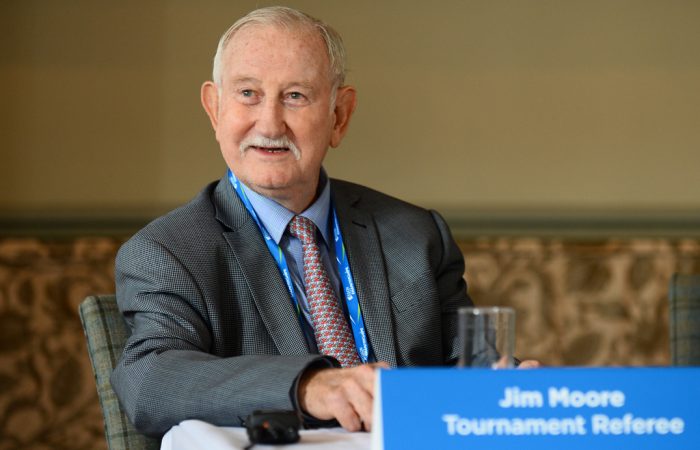 When the Brisbane International launched at the Queensland International Tennis Centre in 2009, a prominent Australian tennis figure provided a reassuring early presence. James Moore, fondly known as Jimmy, was the Tournament Referee – a role that he proudly held until the event’s most recent staging in 2020.

The popular Moore, who was born in Mareeba in Far North Queensland, brought vast experience to his position.

A former professional player who had competed alongside many greats of Australian tennis – including Rod Laver, Roy Emerson and Ken Rosewall – in the 1950s and ‘60s, Moore officiated at every level of the game, ranging from junior ITF tournaments to Davis Cup and many international tournaments.

Following his passing at age 83, the ATP and Britain’s Lawn Tennis Association, are among those paying tribute to Moore’s enduring contribution to tennis. Asitha Attygala, Manager Officiating at Tennis Australia, noted the impact he made to many people locally and on an international scale.

“Tennis Australia Officiating sends it’s condolences to the family of Jimmy Moore. Jimmy has been a mentor and friend to many officials around the world,” Attygala said. “He had utmost respect from everyone and has been a big part of many officials’ development. The Australian officiating community will greatly miss him.”

At a global level, the much-loved and highly respected Moore is arguably best remembered for his many years overseeing the Queen’s Club tournament.

Moore officiated at the grass-court event for 42 consecutive years between 1978 and 2019, overseeing the era in which stars including Jimmy Connors, Boris Becker, Lleyton Hewitt, Andy Roddick, Rafael Nadal and Andy Murray competed. 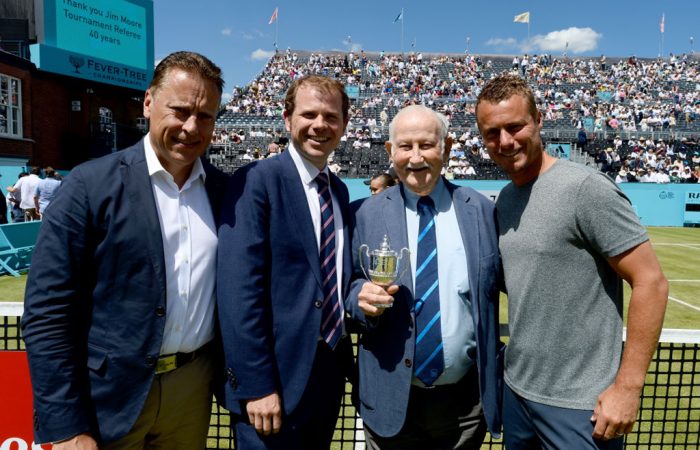 Stephen Farrow was Tournament Director of the prestigious tournament from 2013 until 2020 and established a close friendship with Moore in that period.

“Jimmy was a dear friend to all of us at Queen’s. On a personal level, his advice and guidance to me as Tournament Director was invaluable, and he was loved and admired by our whole team and hugely respected by the players,” said Farrow, now Tennis Australia’s Director of Tournaments, Player and International Relations.

“We will all remember fondly his stories of his days driving round Europe playing with the likes of Laver and Emerson, and later officiating over (John) McEnroe, Hewitt, Murray and others, usually told over a Pimm’s at the end of a long day of tennis.

“It is a privilege to have known him and worked with him, and we will all miss him hugely.”

Many remember Moore’s remarkable composure as McEnroe called for the Referee as he argued a line call at Queen’s in 1984. After Moore advised the passionate American that he agreed with the umpire, play calmly continued. When McEnroe returned to the tournament to attend an on-court presentation in 2016, Moore handed him a commemorative replica trophy and the pair shared a warm embrace.

While that anecdote spoke volumes for Moore’s character, so too did his enduring passion for tennis. The Queenslander – who also competed internationally as a squash player – competed in the singles main draw of five Grand Slams, reaching the second round of the Australian Championships in 1959.

Moore shared many stories from his years touring Europe as a professional player and particularly cherished the relationships created in the sport.

The most significant of these was with his wife, Fay Toyne – also an accomplished player who competed in numerous Grand Slams in both singles and doubles, reaching the Roland Garros final in 1966. Moore and Tones announced their engagement at Wimbledon in 1967.

Hugely popular throughout every level of the tennis community, Moore’s tremendous influence in the sport will endure in many ways. “Jimmy was a true gentleman and legend of the sport. His tales of traveling the world as a player with the elite of Australian tennis royalty would entertain listeners for hours,” said the WTA’s Donna Kelso, who worked alongside Moore at the Brisbane International for many years.

“Jimmy was a mentor and friend to so many officials and players around the globe, especially in Australia and Asia, and he would address any situation with calmness and empathy. His smile and laughter will be missed, however we know his legacy and memory will live on.”

“Jimmy was the heartbeat of the tournament office at every Brisbane International. Always welcoming you with a smile. He held such an important position for the event but always made you feel as though he had time to chat about anything you would need,” – Elia Hill, Tennis Queensland General Manager.

“Jimmy as he was affectionately known by to players and officials around the world, will be deeply missed on the international tennis stage. His wealth of knowledge and experience that he was always willing to share with others, was invaluable. Our next Brisbane International will be a little sad, missing one our foundation event team members and a friend, a mentor to many of us. Thank you Jimmy for all your work in supporting officials and officiating. Rest in Peace my friend,” – Cheryl Jenkins – Australian Open & Brisbane International Chief Umpire.

Moore remained passionate in his support of his first home in the sport at the Mareeba Tennis Club and in recent years, the proud Queenslander had commenced training others to fill his Tournament Referee role at the Brisbane International.

While all would agree that the highly accomplished Moore left huge shoes to fill, there could equally be no questioning that the dedicated official had set a superb benchmark for those who followed.

Jimmy Moore and Fay Toyne announced their engagement at Wimbledon in 1967.