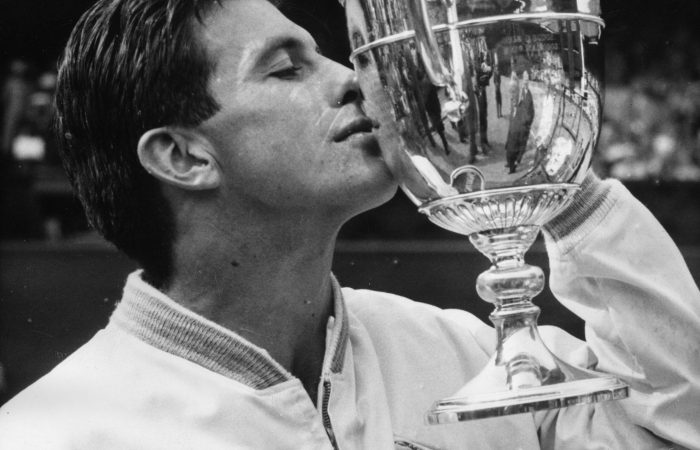 Once recognised as the world’s best amateur tennis player, Ashley John Cooper remains one of Queensland’s most successful athletes on the international stage.

Born in Melbourne but considered a Maroon, Cooper won 4 Grand Slam singles, 4 Grand Slam doubles titles and appeared in 13 major finals in a prolific three year period between 1956 and 1958.

The 5-foot-10 attacking Cooper combined smooth groundstrokes and poise at the net to win the Australian, Wimbledon, and U.S. Championships in 1958, becoming one of only eleven men in tennis history to achieve that feat.

Tennis Queensland President, Warwick Nicol paid tribute to Ashley Cooper on behalf of the entire tennis community in the state.
“We have been very fortunate to have many former legends of our sport actively involved in the promotion of our sport over the last decade. Ash is one of those that comes from an era of true gentlemen. Whilst not to diminish his on court achievements in any way, (There has only been 11 men to capture 3 grand slams in a calendar year, Ash was one of them!) to Tennis Queensland Ashley Cooper was not just a past President, he was family,” Mr Nicol said.

“Each year we celebrate events like the ATP Cup and the Brisbane International thanks largely to the work Ash did to help build the current tennis centre at Tennyson. Many will never know or understand the personal contribution that Ash and his family made to the sport of tennis in Queensland.”

Cooper’s star power was far from limited to the white lines of a tennis court. When he married his wife, Helen Wood in Brisbane a massive crowd gathered on January 2nd 1959 to catch a glimpse of the newlyweds. The Courier Mail’s front page headline read “Near riot as crowd mobs couple.”
Post playing days, Cooper settled in Brisbane to operate a family tennis and squash complex before serving as a Tennis Player Development Administrator with Tennis Queensland, joining the TQ Board in 2004 and eventually ascending to TQ President.

Cooper’s energy and vision for the sport in Queensland was instrumental in the planning, site selection and construction of the Queensland Tennis Centre at Tennyson, which was officially opened on January 2 2009 when Pat Rafter served to Cooper on centre court. His decade long campaign of government lobbying and ambition is the reason Brisbane enjoys a world-class tennis facility and has regularly welcomed the world’s best players to the state.

His determination to share his vast tennis knowledge and passion was not just confined to Queensland, taking his focus nationally as a board member of Tennis Australia for 10 years and rising to Vice President between 2009 and 2012. Cooper’s technical expertise on court surfaces saw him take an active role in the TA Board’s decision to switch the Australian Open surface from Rebound Ace to Plexicushion in 2008.

Cooper’s playing success and commitment to the sport saw him receive accolades on the international, national and state levels.

Mr Nicol added Queensland Tennis owes a great deal to Ashley Cooper.
“As a sporting body we have been very fortunate to have many former great tennis champions offer their time and support of the sport they love. Whilst Ash may have not liked the spotlight he definitely did not shy away from what he believed was his responsibility to give back to this great sport. We thank Mr Ashley Cooper for not only his attacking style of tennis and smooth hands at the net, but most importantly for being the absolute gentlemen that he was. To say we will miss Ash, would be an understatement.“

Ashley John Cooper died at his home after a long illness.