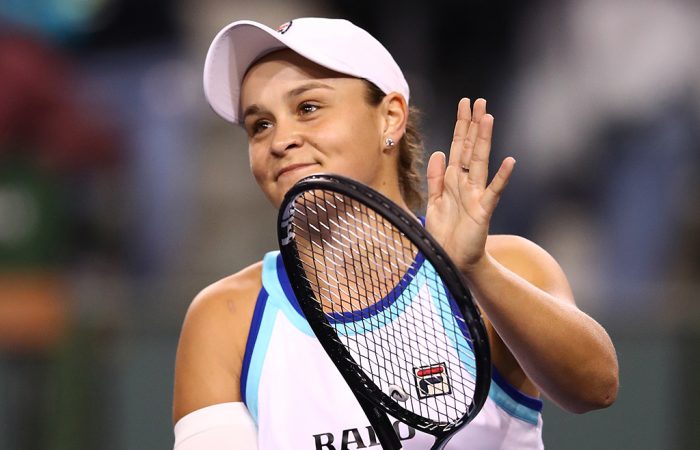 World No.1 Ashleigh Barty has been recognised for her historic year at the Queensland Tennis Awards on Saturday night, awarded the Ashley Cooper Medal, Athlete of the Year for the third consecutive year.

The Hon Mick de Brenni, MP Minister for Housing and Public Works, Minister for Digital Technology and Minister for Sport presented the Award, which was accepted by Ash’s father Rob Barty.

Barty’s inspiring rise to the top of the rankings, highlighted by her first grand slam title at Roland Garros, two more career titles at Miami and Birmingham and two finalist performances in Sydney and Beijing were celebrated on the night, which brings together the wider Queensland Tennis community; including clubs, schools, tournaments, officials, athletes, coaches and volunteers.

Ahead of the evening, Barty accepted the award and spoke to Tennis Queensland Chief Executive Officer Mark Handley about what 2019 has meant to her, crediting her early years playing in Queensland as key to her success.

“For me personally, it’s the most important stage. The grassroots stage is where we all learn our trade and where we fall in love with the sport.

“I think it’s just a massive thank you to all of the volunteers and all of the coaches. In particular to all of the families as well who put up so much time to getting their kids involved in this beautiful sport that we play,” said Barty.

She went on to personally thank her family and tennis team for their support over her life in the game so far. Many of whom, including her parents Rob and Josie and first coach Jim Joyce were in attendance.

“For me it starts with Mum, Dad and my sisters. They have sacrificed so much time for me to try and live out my dream and chase my dreams.

“And then coaches and the staff around me. In particular Jim Joyce, Jason Stoltenberg and Craig Tyzzer. Those three guys have shaped me into the player I am today,” she remarked.

The night was hosted by 22-time grand slam champion, Todd Woodbridge, and attended by 220 of Queensland’s most notable tennis influencers, including Grand Slam champion and legend of the sport Mal Anderson.

The Ashley Cooper Medal was one of 15 Queensland Tennis Awards presented, with the top honour for Most Outstanding Club or Centre closing out proceedings.

Redcliffe Tennis Centre overcame two other stand-out finalists in Caloundra Tennis Club and Trinity Beach Tennis Club to be named Club of the Year for their second time.

Redcliffe’s many successes included remarkable growth across all areas of participation, with membership growing 20 percent. One key initiative for the club in 2019 was to expand their program for People with Disabilities to now deliver tennis coaching through the Cerebral Palsy League and at Woody Point Special School.

The award was accepted by Director and Head Coach, Chris Novic who congratulated the tennis community for their efforts throughout the year and acknowledged Life Members Ken and Barbara Laffey as well as outgoing Tennis Queensland President Mark Bloomfield for inspiring many of the successes of his centre’s operation and coaching programs.

Tennis Queensland CEO, Mark Handley, was thrilled for all of the finalists and winners and praised each one’s dedication to growing tennis across the state.

“We are delighted by the high calibre of finalists and winners recognised this year.

“It is because of this dedicated community that Queenslanders have excelled in all forms of the game, including breaking records in participation; our representative teams winning the esteemed Bruce and Pizzey Cup competitions; and three of the four women who have taken the Australian Fed Cup team to next month’s final hailing from Queensland.”

“We congratulate and thank you all for your passion and ongoing commitment to this wonderful sport. As we look forward to an incredible summer, we wish our representatives the best of luck at the Australian Tennis Awards and encourage everyone to enjoy the exciting event line-up that will see fans from across the globe tune in to Brisbane this January.” said Handley.

Winners of the Queensland Tennis Awards have now been nominated for the Newcombe Medal, Australian Tennis Awards, with finalists for the categories to be announced this week.

Winners will be presented at the Newcombe Medal awards ceremony at Melbourne’s Crown Entertainment Complex on Monday 2 December.