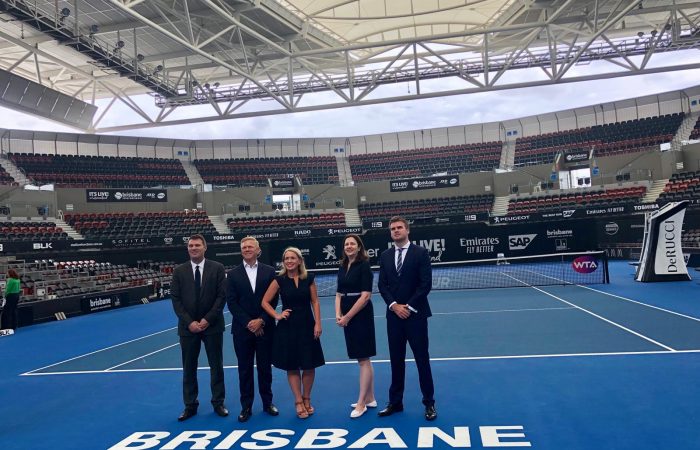 A festival of international tennis is set to take place in Queensland with Brisbane one of three cities to host the inaugural ATP Cup from 2020.

With more than 100 players representing 24 nations as they vie for $22 million prizemoney and 750 ranking points, Tennis Australia is aiming to use the event to help launch the global tennis season.

“Over the last decade, with the support of the Queensland Government and Brisbane City Council through Brisbane Marketing, we have seen the Brisbane International grow to become the nation’s most successful tennis tournament outside the Australian Open,” Pearson said.

“In 2020, the Brisbane International will continue to grow with the world’s best male tennis players beginning their season in Brisbane in the all new ATP Cup which will see the players teaming up to represent their country for a share in 750 ATP Ranking points and $22 million in prize money.

“Our aim throughout this whole process has been to grow tennis around the country by providing increased opportunities for fans to watch world-class tennis, give the players the best facilities and environments to perform in and ensure they are appropriately rewarded,” Pearson continued.

Premier Annastacia Palaszczuk said securing the rights to the ATP Cup would ensure the world’s best tennis players continue to come to Queensland in January.

“Tennis is much loved by Queenslanders right across the state and is a strong tourism driver,” the Premier said.

“The iconic Brisbane International attracts tens of thousands of visitors and injects close to $10 million into the state’s economy each year.

“With the introduction of the ATP Cup we will continue to grow this passion for tennis as fans from around the country and the world travel to Brisbane to cheer on their favourite players.

“On top of that, the Brisbane International will continue to host the world’s best female players at Tennyson.”

“With the introduction of the ATP Cup we know we continue to grow this passion for tennis as fans from around the country and the world travel to Brisbane to cheer on their countrymen in a truly global event which gives players the chance to see their nation crowned the best in the world,” Ms Jones said.

“The introduction of the ATP Cup into the Brisbane International will help us connect to a whole new generation of fans across the country and the globe by providing a new source of inspiration for young athletes to choose our sport,” Handley said.

“We’ve worked closely with the Queensland Government, via Tourism and Events Queensland, and Brisbane City Council through Brisbane Marketing to ensure world-class men’s and women’s tennis content will continue to be played in Brisbane from 2020 featuring the same calibre of players the fans are used to seeing here every year,” Handley continued.

Brisbane Deputy Mayor Cr Adrian Schrinner said the extended festival of tennis would continue to attract domestic and international visitors to the city.

“The announcement today means the global tennis season is guaranteed to begin each year in Brisbane and the continued delivery of world-class tennis for residents and visitors.”

The ATP Cup will begin on Friday 3 January 2020 and will be played across Brisbane, Sydney and a third capital city over 10 days.

The move represents the latest initiative by ATP to innovate in the sport, as well as providing increased earning opportunities for its players, and introducing new fans to the game. The 2020 ATP Cup will offer $22 million in prize money and up to 750 ATP Rankings points to the winners.

The format of the ATP Cup will see nations split into six groups, with eight teams emerging from the round-robin stage to compete in the knockout phase until only one team is left standing. There will be up to five players in each team, with ties comprising two singles matches and one doubles match. The criteria for entry into the ATP Cup will be based off the ATP Ranking of the No. 1 singles player from each country.

While 2020 will see the continuance of the Brisbane International women’s tournament Tennis Australia and the WTA are working closely together to develop exciting new concepts and opportunities for WTA players in Australia in the near future.”