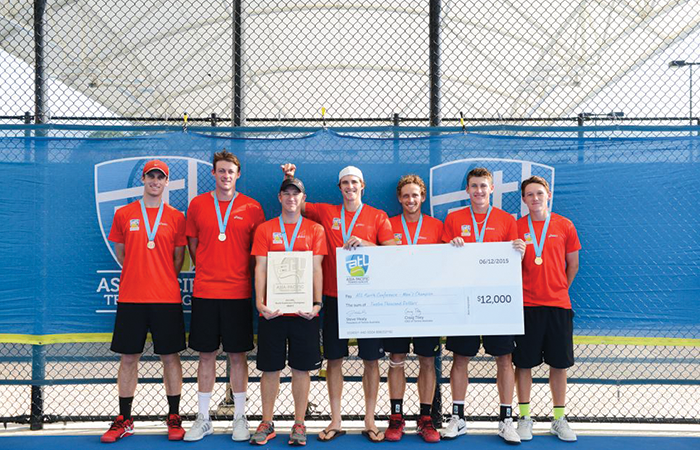 The unstoppable Tennis Brisbane Chargers have racked up their fourth consecutive title after defeating the Sunshine Coast Breakers at the Asia-Pacific Tennis League (ATL) 2015 North Conference. The win marked a historic undefeated record for the Chargers’ men, who have come out on top of every local Conference since the ATL’s inception in 2012.

Leading the charge at the Queensland Tennis Centre was Chargers spearhead, Robert Smeets who took on Breakers’ number 1 Dayne Kelly in a thrilling match of FAST4 tennis. Kelly fought hard to take the match to a sudden death point in the second set tiebreak, before Smeets lined up an epic smash to secure the win, 4-2 4-3 (4). In another spectacle for the local crowd, Maverick Banes (Chargers) and Mitchell Robins (Breakers) went head to head in a match that had everything from marathon rallies to a running forehand winner down the line to clinch the win for Banes. The powerful display by the full Chargers line up earned them victory as 2015 Conference Champions. The Chargers will now defend their title as ATL Playoffs Champions at the Australian Open in January. They will be joined by the Sunshine Coast Breakers, who have earned their first appearance in Melbourne with their second place overall finish.

In the women’s final, Canberra Velocity ended their first interstate Conference on top, defeating the Brisbane Sharks in similar fashion. The solid Velocity line-up including the likes of 2015 Mildura Grand International champion Alison Bai proved too strong for the Sharks, with results confirmed in four singles victories. Bai (Velocity) set the scene for the day, powering through her match against Sharks’ Stefanie Tan 4-1 4-0. The Sharks fought hard to hold their chance at the title in the proceeding rubbers. Teammate Ashling Sumner (Sharks) took Velocity’s Ashley Keir to a sudden death point in a second set tiebreak, but it was again the visitors who held strong with Keir securing the win that also crowned Velocity champions 4-2 4-3 (5-4). Both the Velocity and Sharks women will now represent the North Conference at the ATL Playoffs at the Australian Open.