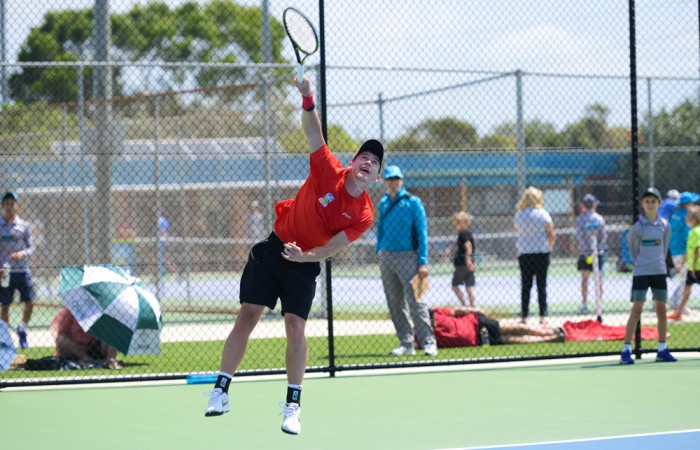 Over the weekend, the Asia-Pacific Tennis League North conference continued with rounds 4, 5 and 6 for Pool A contested in Queensland.

Brisbane Sharks notched up two wins at home to keep their undefeated streak alive in Pool A. In a top of the table clash, the Sharks took to battle against Beenleigh Blaze. The highlight of the tie was another three set battle between Priscilla Hon and Alicia Smith. Hon turned the tables on Smith after a defeat the week prior with a three set win setting the night up for the home team.

The Sharks crowd was shocked when Beenleigh Blaze number one Lachlan Treacher took down Steve de Waard in three sets but wins to Calum Puttergill, Logan Mackenzie and Scott Puodziunas got things back on track before they closed out a 4-2 win doubles.

The Tennis Brisbane Chargers were decisive winners over the Tennyson Volt winning both men’s and women’s ties 5-1. The Chargers’ victory was highlighted by a great comeback by Australian Junior Davis Cup representative Blake Ellis. Ellis trailed Brett Hunter 4-2 3-1 before coming back for a 2-4 4-3 4-3 victory.

The Blaze home crowd was out in force on Saturday afternoon to support their team as they took on Tennyson Volt. Isaac Frost opened well for the Volt defeating the in-form Lachlan Treacher in two close sets. The Volt capitalised on the start with Kaden Hensel, Michael Look and Brett Hunter securing singles wins to set up an unassailable 4-0 lead. The Blaze flipped the result the other way in the women’s tie securing a 5-1 win overall. The match was highlighted for the Blaze by a 4-0 start in singles with wins to Alicia Smith, Gabriela McLaughlin, Aleksa Cveticanin and Olivia Gadecki.

The Tennis Brisbane Chargers’ men rebounded from a first week loss to the Brisbane Sharks with a 4-2 win at Beenleigh. Whilst Oliver Anderson defeated Robert Smeets at the number one spot, wins to Maverick Banes, Gavin van Peperzeel and Blake Ellis put the Chargers in pole position heading into the doubles. The tie was sealed when Banes/van Peperzeel combining to defeat Anderson and Puttergill.

The Sharks women improved to a perfect 5-0 record with a 6-0 thumping of the Chargers, highlighting the depth contained in their line up.

We welcomed home the Sunshine Coast Breakers on Sunday for a scorching day of tennis in Caloundra. The Breakers and Sydney Saints from Pool B travelled to Queensland to compete alongside all teams from Pool A in the final decider before finals. The feature match of the day was between world No.154 Jordan Thompson (Saints) and Dayne Kelly (Breakers). The epic three-setter saw Kelly rebound from a set down, then fight hard from 3-0 behind in the final set to eventually close out the rubber in a tiebreak.

In Pool A, the Sharks continued their strong form with another convincing win by both the men’s and women’s sides against Tennyson Volt firming both teams’ place in the semi finals and ending both Volt teams’ chances. The Chargers men finished their season on top after another defeat of the Beenleigh Blaze, whilst the Blaze women saw to the end of the Chargers women’s season and confirmed their own place in next weekend’s finals.

The Sunshine Coast Breakers men continued to dominate Pool B after wins against the Western Sydney Warriors on Friday, Canberra Velocity Saturday afternoon and Sydney Saints on Sunday at home. The Breakers ended the season undefeated and will take on the second place finisher from Pool A in the semi finals on Friday night in front of their home crowd at the Sunshine Coast Regional Tennis Centre.

The Breakers women were not so fortunate missing out on a Pool B top two position to continue on in semis. The young Breakers continue to compete well in each match and will take a great deal of experience into next year’s competition.