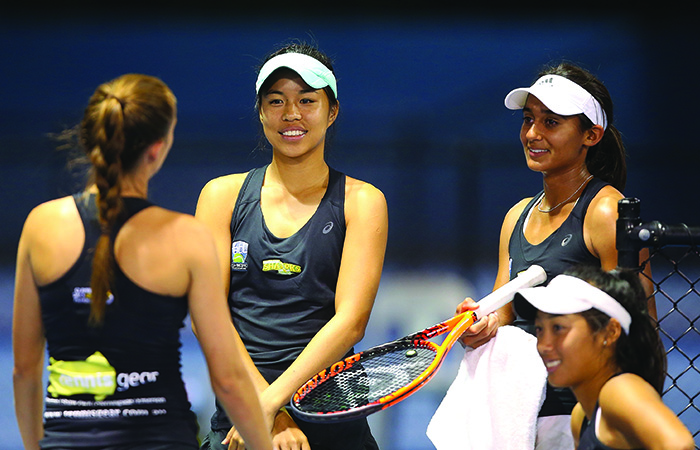 The Brisbane Sharks sit comfortably at the top of the Asia-Pacific Tennis League North Conference table in Pool A after a thrilling first weekend of action. Both the men’s and women’s teams survived their first weekend undefeated, taking on tough competition in the Beenleigh Blaze, Tennyson Volt and local favourites Tennis Brisbane Chargers, who were clipped in a count-back on sets last Saturday night. The Sharks will now be the team to watch across the upcoming weekend of action, kicking off tomorrow night on familiar ground at home venue, Shaw Park Tennis Centre.

In Pool B, Queensland’s own Sunshine Coast Breakers took the coastal heat to Canberra and Wollongong over the weekend showing the interstate rivals that whilst currently competing in unfamiliar territory, this Queensland team have their sights set for a finals berth back home next weekend. The men’s team shocked the local crowds with a strong undefeated weekend that included facing off with Australian No.2 Nick Kyrgios playing for the Canberra Velocity. The women also found their feet after a tough first couple of days, managing to come up with a win on day three of the Conference on a close count back against the Sydney Saints.

As the fourth round draws closer, leading Queensland players have arrived home in time to take the court for their respective teams this weekend. Tennis Brisbane Chargers will be bolstered by the return of world No.90 John Millman who arrives home from Japan where he won the 2015 Hyogo Noah Challenger event in Kobe. World No.264 Maverick Banes and world No.281 Gavin Van Peperzeel are also ready to step on court in the Charger’s red this weekend.

In the women’s field, world No.330 Priscilla Hon and world No.360 Kimberly Birrell will be representing this weekend after both starting the week on a high as finalists in the Junior Female Athlete of the Year category at the Newcombe Medal. Birrell took home the honours and will bring new confidence to the court with a likely fourth round clash against fellow finalist Hon on court from 6pm tomorrow night. She will then look to star in a home round appearance at Beenleigh Tennis Club on Saturday afternoon. Beenleigh Blaze is known for hosting a strong home tie with crowds sure to boost the local team up the Pool A ladder leading in to finals.

The sixth and final round before semis for Pool A will take place at Sunshine Coast Regional Tennis Centre this Sunday, with Pool B’s Sunshine Coast Breakers also appearing for their first tie on home soil against New South Wales’ Sydney Saints. Both Breakers men’s and women’s team have seen impressive results against the Saints and will hope to continue this for a chance to continue into the finals the following weekend.

Watch all the action as it unfolds in the second weekend of the 2015 North Conference kicking off on Friday 27 November 2015 from 6pm at Shaw Park Tennis Centre (Pool A) or 7.00pm at the Sydney Olympic Park Tennis Centre (Pool B). As well as first-class tennis, you can enjoy live music, food stalls and plenty of court-side activities at each round throughout the conference.