Federer, Sharapova, Stosur and Nishikori back in Brisbane for 2016 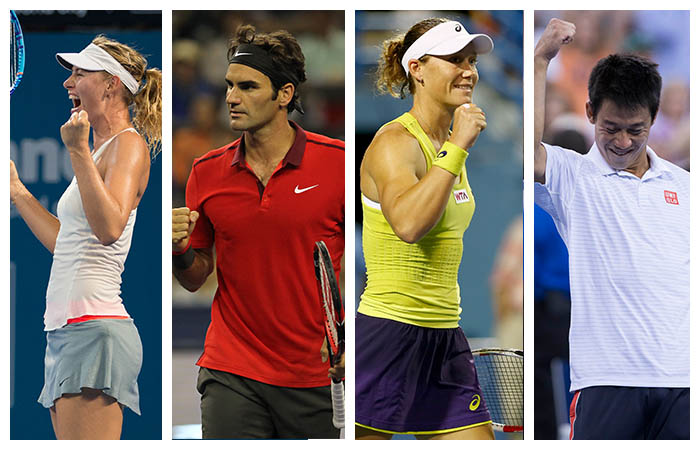 The pair will be joined by fellow tennis superstars Kei Nishikori (JPN) and Queensland’s own Samantha Stosur at Brisbane International 2016 presented by Suncorp, set to get under way at Queensland Tennis Centre on Sunday 3 January.

Federer will return to Brisbane for a third consecutive year. In 2014 he finished runner-up to local favourite Lleyton Hewitt (SA) before going one better in 2015, clinching his first Roy Emerson Trophy and 1000th match win in a three-set thriller against Milos Raonic (CAN).

The world No.2 said he was looking forward to returning to the scene of his 2015 triumph.

“I’m excited, especially after this year with the win and the 1000th match win, it was like a picture perfect moment,” Federer said.

“I’m coming back maybe with a little bit more pressure next year having to defend [the title], but I’ve played there two years now and it’s gone so well.”

World No.3 Maria Sharapova will lead a world class women’s field vying for the 2016 Evonne Goolagong Trophy. The Russian ace defeated Ana Ivanovic (SRB) to add a 35th career title to her name on Pat Rafter Arena in January.

“It was a very special event for me, I started playing [this tournament] quite late in my career and when you come to a new tournament having travelled around the world it’s always a unique experience,” she said.

“I was always hoping and envisioning myself winning that trophy so for it to happen quite soon was really special to me.”

Sharapova will be joined in the women’s field by hometown favourite and Australian No.1 Samantha Stosur.

“I’m really excited to return to Brisbane in 2016, it’s my home tournament and my home crowd and I’m looking forward to starting the year on a good note. It’s always an incredibly strong field and I’m sure this summer will be no different,” said the world No.22.

“I grew up not too far from Queensland Tennis Centre and have lots of great memories on these courts. The crowds in Brisbane have been unbelievable in the past couple of years and hopefully tennis fans are looking forward to another great event this summer.”

To here more from the first four players announced to play at Brisbane International 2016, click here.