History beckons for Purcell and Ebden in Wimbledon doubles final 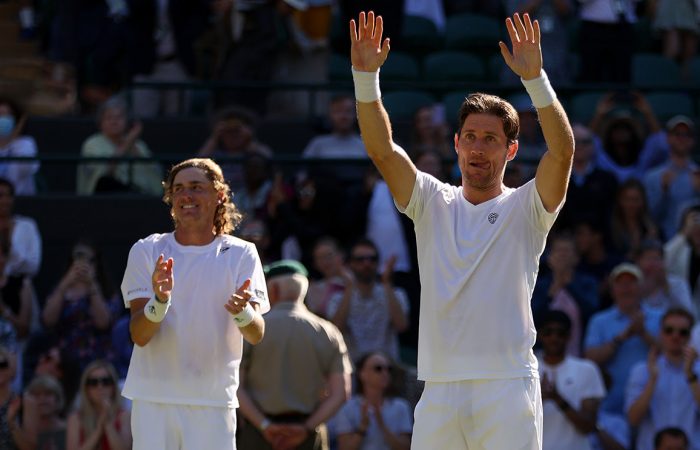 For the first time in 22 years, an all-Australian team has advanced to the gentlemen’s doubles final at Wimbledon.

Matthew Ebden and Max Purcell’s path to their first final at the All England Club has been extraordinary too.

The No.14 seeds have saved eight match points (three in their opening round and an incredible five in the semifinals), eliminated three seeded teams and spent more than 16 hours on court.

Four of their five matches have extended to five sets and they have twice recovered from two-set deficits to keep their title hopes alive.

Their perseverance has paid off, propelling them into a final showdown with defending champions Nikola Mektic and Mate Pavic.

The second-seeded Croatians are aiming to become the first team to defend their Wimbledon title since Canadian Daniel Nestor and Serbia’s Nenad Zimonjic in 2009.

Ebden and Purcell are eyeing history of their own, as they look to become the first all-Australian champions since Todd Woodbridge and Mark Woodforde in 2000.

It would also be a first Grand Slam men’s doubles title for 34-year-old Ebden and 24-year-old Purcell.

Nine Australians are in action on day 13, including Heath Davidson in the quad wheelchair singles semifinals. He faces world No.1 Niels Vink for a place in the final.

[14] Matthew Ebden (AUS)/Max Purcell (AUS) v [2] Nikola Mektic (CRO)/Mate Pavic (CRO)
Gentlemen’s doubles, final, Centre Court, second match
World No.31 Ebden and world No.34 Purcell have advanced to their second Grand Slam final of the season. After a runner-up finish at the Australian Open, they are hoping to go one better at Wimbledon. The Aussie combination face world No.3 Pavic and world No.6 Mektic, who have scooped two grass-court titles so far this season and are on a 23-match winning streak on grass.
Head-to-head record: First career meeting

Heath Davidson (AUS) v [1] Niels Vink (NED)
Quad wheelchair singles, semifinals, Court 14, first match (from 8pm AEST)
Davidson stormed into the semifinals with a comprehensive win against world No.3 Andy Lapthorne in his debut at the All England Club earlier this week. The 35-year-old Australian faces a bigger test today, pitted against world No.1 Vink. The 19-year-old Dutchman is on a 21-match winning streak and has won his four most recent meetings with world No.5 Davidson in straight sets.
Head-to-head record: Vink leads 5-2

Mark Philippoussis (AUS)/Tommy Haas (GER) v Arnaud Clement (FRA)/Michael Llodra (FRA)
Gentlemen’s invitational doubles, No.1 Court, second match
With his booming serve, Philippoussis enjoyed much success at Wimbledon during his professional career. The 2003 singles finalist made his 10th and final appearance in 2006. He is looking for his second win alongside Haas this week.

Rennae Stubbs (AUS)/Thomas Enqvist (SWE) v Cara Black (ZIM)/Todd Woodbridge (AUS)
Invitation mixed doubles, Court TBA (not before 1am AEST)
The opportunity to advance to the invitation mixed doubles final is the prize on offer in this match, with both teams undefeated so far this tournament. Australian greats Stubbs and Woodbridge are both former world No.1-ranked doubles players.

[6] Jake Dembo (AUS) v Keaton Hance (USA)
Boys’ 14 and under singles, consolation round, Court 6, first match
Dembo is representing Australia in the inaugural 14 and under boys’ singles competition at Wimbledon. The 14-year-old from Perth recorded two wins from his three round-robin matches and finished second in his group. Dembo now competes in the consolation round against other players who finished second in their respective groups.

Giselle Isabella Guillen (AUS) v Azuna Ichioka (JPN)
Girls’ 14 and under singles, consolation round, Court 5, second match
Guillen, a 14-year-old from New South Wales, is Australia’s representative in the first 14 and under girls’ singles competition at Wimbledon. She finished second in her round-robin group, with two wins from three matches. Guillen is now competing in a consolation play-off against the other players who finished in second place.