Australian combination Sam Stosur and Matthew Ebden are through to the Wimbledon 2022 mixed doubles final. 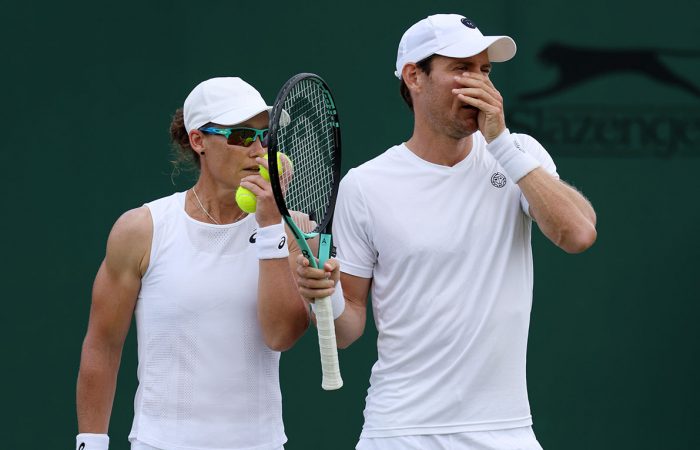 Sam Stosur and Matthew Ebden have become the first all-Australian team to reach a Wimbledon mixed doubles final in 18 years.

The Aussie duo sealed their spot in this year’s championship match with a 6-3 5-7 7-5 victory against Americans Coco Gauff and Jack Sock in semifinal action at the All England Club today.

Little separated the two teams in the one-hour and 59-minute encounter, with Stosur and Ebden winning 100 points to their opponent’s 98.

Stosur and Ebden’s experience under pressure, however, did prove telling against a first-time team. They lifted in the closing stages of the match to become the first all-Australian team since Alicia Molik and Todd Woodbridge in 2004 to advance to a Wimbledon mixed doubles final.

It is Stosur and Ebden’s second Grand Slam final as a team, having previously finished runners-up in their first tournament together at Australian Open 2021.

Ebden is the 17th Australian man to progress to a Wimbledon mixed doubles final in the Open era – and the first since Paul Hanley in 2005.

Stosur now has the chance to become the first Australian woman to win three Wimbledon mixed doubles titles in the Open era.

Ebden and Stosur will face the No.2 seeds, defending champions American Desirae Krawczyk and Brit Neal Skupki, in the final.

Ebden is still alive in the Wimbledon 2022 gentlemen’s doubles competition as well, advancing to the semifinals alongside compatriot Max Purcell earlier today.