Australian Alex de Minaur has matched his career-best result at Wimbledon, progressing to the third round for a second time. 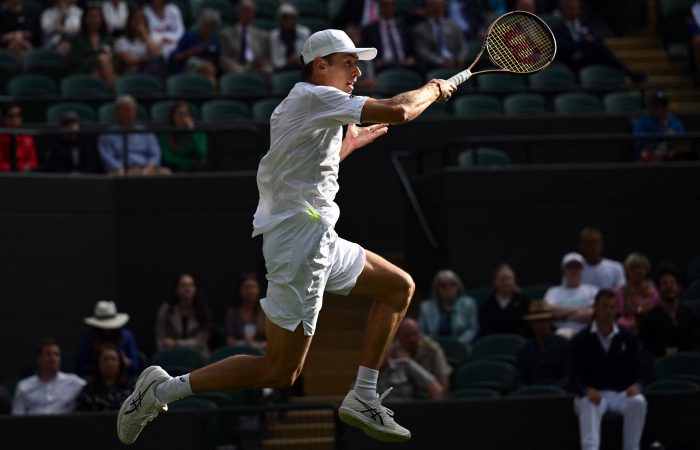 Alex de Minaur has won his way into the third round of Wimbledon after an epic battle with emerging Brit Jack Draper.

In a pulsating clash late on the fourth evening, De Minaur withstood a barrage of groundstrokes from Draper, fighting back from a set down to record an impressive four-set victory.

“I’m just extremely stoked. For me, I see that match as a very high-quality win against an opponent who has been playing some great tennis. He’s been inspired,” De Minaur said.

“I definitely saw this as a very dangerous match, and I’m relieved to come through and be playing some great tennis and staying tough. I’m just really proud of my performance.”

The match had a rain delay, forcing the closure of the roof midway through the first set, with players forced to leave the court for 35 minutes.

On resumption, Draper broke serve to secure the opener 7-5 and had 0-40 on the De Minaur serve in the first game of the second set.

The Australian fought out of that hole and battled his way to a tiebreak, despite winning only four points on Draper’s serve up to that stage of the set.

The tiebreak was the turning point of the match, as De Minaur rattled off seven straight points to level the match.

“All of a sudden, I played a great tiebreak, and you could just tell how the whole momentum switched,” De Minaur said.

“Even though I had a couple of lapses in concentration in the third and the fourth set, I stayed positive, I stayed out there, did what I needed to do, and got the job done.”

"This is just ridiculous"

This equals De Minaur’s best run at Wimbledon, matching his third-round run on debut in 2018.

Having handled one local, he will now have to face another in the third round. Wildcard Liam Broady is his next opponent.

These two met at Eastbourne on grass last year, with De Minaur winning that match in straight sets.

The 23-year-old was joined in the third round earlier today by Nick Kyrgios and Ajla Tomjlanovic. While fellow Australian Jason Kubler will serve for victory in his second-round clash when the rain-delayed match resumes on day five.

> READ: Kyrgios powers into third round at Wimbledon