De Minaur charges into second round at Wimbledon

Australian Alex de Minaur has scored a straight-sets win against Bolivia's Hugo Dellien to begin his Wimbledon 2022 campaign in style. 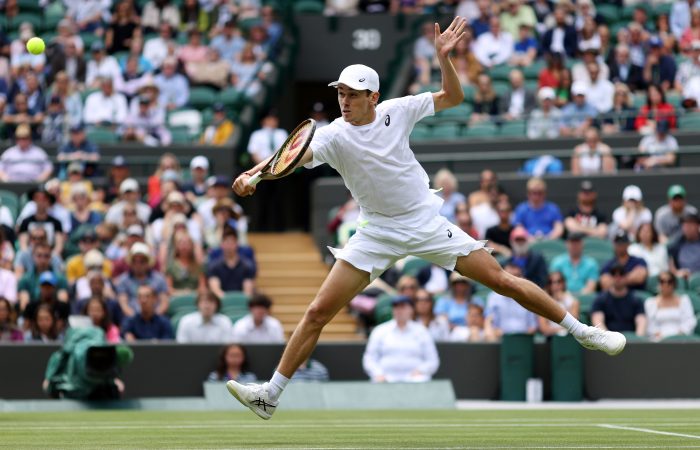 Alex de Minaur has won his way through to the second round at Wimbledon after a polished display on day two.

The Australian took just one hour and 47 minutes to complete a 6-1 6-3 7-5 victory over Bolivia’s Hugo Dellien.

It was a convincing performance by the world No.27, who struck 24 winners to 15, won 79 per cent of points on first serve, won 48 receiving points to 28 and broke serve seven times.

After a dominant first set, De Minaur found himself 1-3 down in the second before peeling off five games in a row to establish control once again.

In his fourth main draw appearance at Wimbledon, De Minaur made amends for last year’s first-round loss to Sebastian Korda and in the process, has set up a meeting with local hope Jack Draper.

De Minaur’s section of the draw has opened up after former finalists Marin Cilic and Matteo Berrettini both contracted COVID-19 and had to withdraw from the tournament.

With a career-best third-round effort at Wimbledon in 2018, the 23-year-old will see this as a chance to better that.

In ladies’ singles action today, Australian No.1 Ajla Tomljanovic stunned No.18 seed Jil Teichmann of Switzerland in the first round.