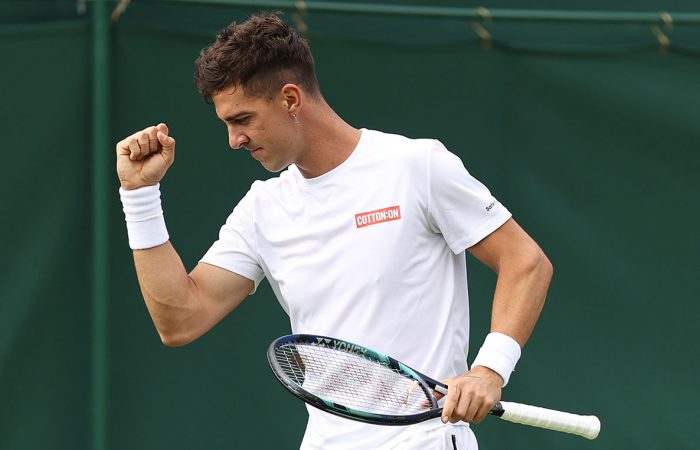 The sun is shining brightly for Thanasi Kokkinakis on a rain interrupted day one of Wimbledon 2022.

It was a triumphant day for the Australian, and another of his countrymen almost climbed the mountain at the same time.

Kokkinakis and Max Purcell shared the court, albeit on opposite sides of the net in the Australian Open men’s doubles final this year, and today they each chased their first-ever singles victory at Wimbledon.

Kokkinakis battled through a tight first set, before taking control to defeat Kamil Majchrzak of Poland 7-6(5) 6-2 7-5.

This is Kokkinakis’ first main draw victory at Wimbledon, where he last featured in the main draw in 2017.

The Australian Open men’s doubles champion slammed down 17 aces to four and won 80 per cent of points on first serve in a polished display of ball striking.

He struck 53 winners to 33 and recovered after an early break of serve in the third set to break twice himself and close it out in straight sets.

This is Kokkinakis’ seventh career Grand Slam singles match win – and just his third from the past seven injury-interrupted years.

For Purcell this had already been a day of firsts, qualifying for his first main draw, playing his first five-set match, and so nearly winning his first Grand Slam singles match.

The gutsy Australian recovered from a two-set deficit to push a fifth set with veteran Frenchman Adrian Mannarino.

Purcell created six break point chances in the final set but couldn’t convert any, with Mannarino converting his first match point to prevail 6-3 7-6(0) 4-6 4-6 6-4.

Overall, the Australian generated 25 break point chances to 12 and won nearly every statistics category in an impressive Wimbledon debut.

John Millman was another Aussie to depart on day one, losing a tight four-set battle with 25th seed Miomir Kecmanovic of Serbia, while two-time Wimbledon champion Andy Murray proved too strong for James Duckworth in their Centre Court clash.

Maddison Inglis also crashed out of the ladies’ singles competition, beaten by Hungary’s Dalma Galfi in three sets. The 24-year-old from Perth was the only Australian woman to complete her scheduled match on a rain-interrupted day.