Aussie duo Matt Ebden and Max Purcell are through to the men's doubles semifinals at Australian Open 2022. 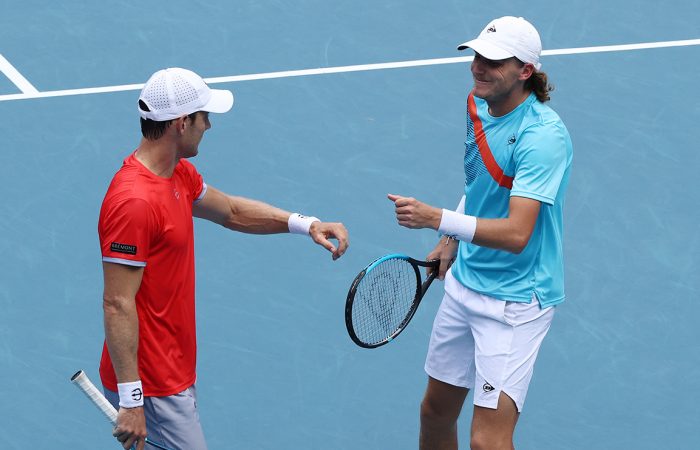 The Aussie duo eliminated No.10 seeds Wesley Koolhof of the Netherlands and Brit Neal Skupski in quarterfinal action at Melbourne Park today.

Ebden and Purcell’s hard-fought 3-6 6-4 7-6(6) victory is their third consecutive win against a seeded team.

“They made it so tough for us,” Ebden said. “We really lifted our game at the end of the second set … then until the end, we just hung tough.”

World No.21 Koolhof and world No.20 Skupski entered on an 11-match winning streak, having scooped Melbourne Summer Set and Adelaide International titles earlier this month.

Their confidence showed early in the Kia Arena showdown too, snaring the only break in a tight opening set.

But the Aussies refused to be rattled, fighting back to take the second set.

With a patriotic crowd cheering them on, world No.55 Ebden and world No.34 Purcell continued to thrive under pressure. They broke Koolhof’s serve in the fourth game of the deciding set and raced to a 4-1 lead.

The No.10 seeds weren’t done yet, however, breaking Ebden’s serve in the seventh game.

Games then continued on serve to force a deciding match tiebreak, where Purcell and Ebden held their nerve to close out an incredible victory after two hours and 14 minutes on court.

“They came back at us hard and made it really tough. It was quality doubles,” Ebden said.

“The key was helping each other out. I think we both lifted a little bit when the other one might have missed one or two. That was key. A couple returns, a couple extra serves, then the crowd really played a part.”

This is a career-best result for 34-year-old Ebden in an Australian Open men’s doubles draw, while it is a second semifinal appearance for 23-year-old Purcell.

They’ll now face American Rajeev Ram and Brit Joe Salisbury, the No.2 seeds who are aiming to advance to a third consecutive Australian Open final, in tomorrow’s semifinals.

It will be a rematch of last year’s US Open quarterfinal, where Ebden and Purcell held four match points against the eventual champions.

“We know what to expect,” said Purcell, who is teaming up with Ebden for only the second time. “We’re in the semifinals, so anything can happen. Plus we’ve got the home crowd.”

Ebden and Purcell are the second all-Australian team to advance to this year’s AO men’s doubles semifinals, joining wildcards Thanasi Kokkinakis and Nick Kyrgios, who won their quarterfinal yesterday.

This is the most Australians to progress to this stage in an Australian Open men’s doubles draw in 29 years and the first time two all-Australian combinations will contest the semifinals since 1985.