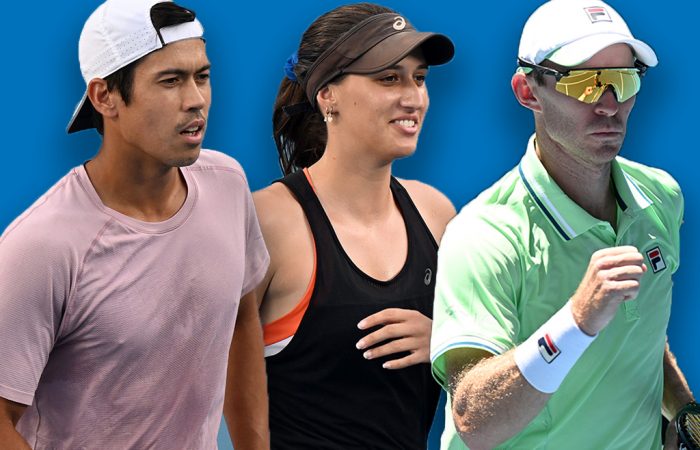 It is day 10 at Australian Open 2022 and many Aussie players remain in contention at their home Grand Slam.

This includes Melbourne local Jaimee Fourlis, who has advanced to the mixed doubles semifinals alongside fellow Aussie Jason Kubler.

The wildcards have both overcome serious injury setbacks to chase their tennis dreams and are relishing the opportunity they have.

“(We) didn’t expect that to say the least,” said the 22-year-old Fourlis, who is returning from shoulder surgery.

“For me it’s been a rough three years, so just to be able to still play and be happy, I think that’s a big bonus. I’m really happy to still be here.”

Perseverance has paid off for Melbourne-born John Peers too.

The 33-year-old, who was once a ballkid at the tournament, has also progressed to a first Australian Open mixed doubles semifinal.

The world No.12, who is partnering China’s Zhang Shuai, now has his sights set on progressing even further.

“We think we’re a great chance of taking the title,” Peers said after a quarterfinal win yesterday.

The mixed doubles semifinals shape as must-see matches on day 10 at Australian Open 2022.

Matt Ebden (AUS)/Max Purcell (AUS) v [10] Wesley Koolhof (NED)/Neal Skupski (GBR)
Men’s doubles, quarterfinals, Kia Arena, second match (not before 1pm AEDT)
After claiming titles in Melbourne and Adelaide to begin the season, world No.21 Koolhof and world No.20 Skupski are on an 11-match winning streak. Aussie duo Ebden, a 34-year-old from Western Australia ranked No.55, and Purcell, a 23-year-old from New South Wales ranked No.34, have eliminated two seeded team so far this tournament, proving they can’t be discounted. “In our home Slam and with this crowd behind us, we just want to go crazy and go for it. That’s our plan,” said Ebden.

[9] Storm Sanders (AUS)/Caroline Dolehide (USA) v [1] Barbora Krejcikova (USA)/Katerina Siniakova (CZE)
Women’s doubles, quarterfinals, Kia Arena, third match
Sanders is enjoying a career-best Australian Open run, advancing to the quarterfinals for the first time. “And we want to keep going,” said world No.27 Sanders, who is making her 10th appearance in an AO women’s doubles draw. The 27-year-old Australian and American partner Dolehide, a 23-year-old ranked No.26, now face the world’s top team. World No.2 Krejcikova and world No.1 Siniakova are the reigning Roland Garros and Olympic champions and were finalists at AO 2021.

[2] Zhang Shuai (CHN)/John Peers (AUS) v [5] Kristina Mladenovic (FRA)/Ivan Dodig (FRA)
Mixed doubles, semifinals, Margaret Court Arena, third match (not before 4pm AEDT)
Peers and world No.8 Zhang have advanced to their third Grand Slam semifinal as a team and their first at the Australian Open. The second seeds have done so in style too, having not lost a set so far. “We have fun together out on court and that’s why we keep playing together,” Peers said. They face an accomplished team in today’s semifinal. Mladenovic is a former world No.1 and a two-time AO mixed doubles finalist, while world No.13 Dodig is a three-time Grand Slam mixed doubles champion.

[WC] Jaimee Fourlis (AUS)/Jason Kubler (AUS) v Lucie Hradecka (CZE)/Gonzalo Escobar (ECU)
Mixed doubles, semifinals, Rod Laver Arena, night session, second match
Aussie wildcards Fourlis and Kubler admit they are “both pretty shocked” to be in the semifinals. Neither had won a Grand Slam mixed doubles match before this tournament, yet have eliminated three very experienced teams. Tonight they face world No.29 Hradecka and world No.39 Escobar. “I think every match we’ve played on paper we were heavy underdogs,” said 28-year-old Kubler. “Even going forward, we probably still have that mindset where we go out there, swing as hard as we can, see how it goes.”

Charlotte Kempenaers-Pocz (AUS) v Tereza Valentova (CZE)
Girls’ singles, third round, Court 6, second match
An impressive summer continues for Kempenaers-Pocz. The 17-year-old has compiled a number of professional-level milestones, including a first top-150 singles win and first Grand Slam doubles victory. The South Australian has now progressed to the third round in the AO girls’ singles competition, where she faces Valentona. The 14-year-old Czech is ranked No.79 and contesting her first junior Grand Slam.

[WC] Hayden Jones (AUS) v [4] Jakub Mensik (CZE)
Boys’ singles, third round, Court 3, third match
Jones is enjoying a dream Grand Slam debut, advancing to the third round in the boys’ singles competition. The 15-year-old from Queensland, a wildcard entry with an ITF world ranking of No.197, now faces fourth seed Mensik. The 16-year-old Czech is the world’s No.6-ranked junior player. Both players are aiming to advance to their first Grand Slam quarterfinal.

[WC] Charlotte Kempenaers-Pocz (AUS)/Taylah Preston (AUS) v Mao Mushika (JPN)/Mio Mushika (JPN)
Girls’ doubles, quarterfinals, Court 6, fourth match
Two of Australia’s most promising juniors, 17-year-old Kempenaers-Pocz and 16-year-old Preston, are proving why they are ones to watch. The Aussie wildcards have progressed to the quarterfinals in the girls’ doubles competition, where they’ll face the Mushika sisters. The 16-year-old Japanese twins are yet to lose a set this tournament.