In the biggest win of her career so far, Maddison Inglis defeats US Open finalist Leylah Fernandez to move into the second round of the Australian Open. 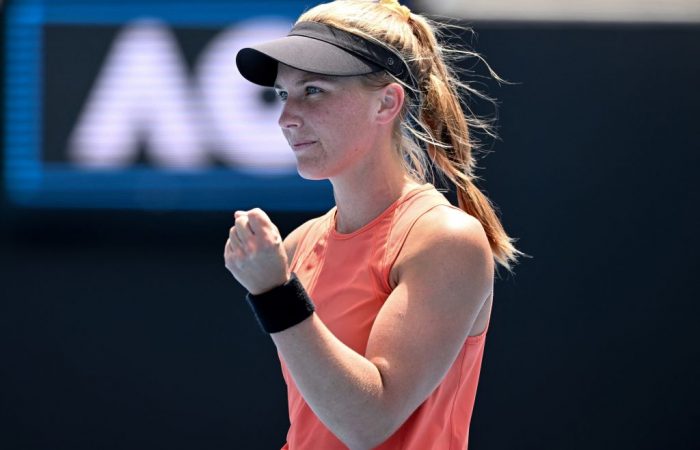 Maddison Inglis is celebrating the biggest win of her career, after overcoming US Open finalist Leylah Fernandez in the opening round of Australian Open 2022.

It was the first main draw Grand Slam win of Inglis’ career, and her first victory over a top-50 player.

“I had thought of this moment for a long time and it’s just pure happiness,” Inglis said post-match.

“I saw the ball got out and I just looked at my box. It was an amazing moment.”

In a ruthless and composed display from start to finish, Inglis closed it out 6-4 6-2.

Such was the Australian’s dominance that she didn’t face a single break point until leading 6-4 4-1. She broke three times herself, striking 14 winners to eight, and wining 70 total points to 54.

Inglis first appeared at the Australian Open in 2016 as an 18-year-old, but it wasn’t until 2020 that she played her next Grand Slam main draw match at the US Open.

Inglis was terrific at the net early in the contest, winning five from five when coming in behind her strong first serve.

She dropped only three points on her first serve throughout that first set, and combined with 19 unforced errors from Fernandez, it helped her take control.

The second set was an even more ruthless display from the Australian, who won 16 of the first 19 points (including eight out of nine on Fernandez’ serve) and claimed two service breaks to race to a 4-0 lead.

Fernandez fought hard to stay in the contest, but Inglis showed terrific composure in grinding out two more service games to secure victory.

“To hold serve every time was really important,” Inglis said.

“She put a lot of pressure on me at the end, but I just told myself to go with what was working and I did it well at the end.”

Inglis takes on world No.147 Hailey Baptiste of the United States in the second round.

What a way to start your #AO2022 campaign 😌#GoAussies • #AusOpen pic.twitter.com/7xLb3RmMCp

On the same day that Inglis won her first Grand Sam match, an Australian legend won her 94th.

Before a vocal crowd on Kia Arena, Sam Stosur extended her farewell tour with a 6-7(5) 6-3 6-3 victory over American Robin Anderson.

Daria Saville, meanwhile, fell victim to Rebecca Peterson’s strong start to the season, with the Swede claiming a straight-sets win.

Saville was broken via a double fault in her opening service game and was unable to capitalise on her own break point opportunity in the next game.

Peterson saved it with a forehand winner after a 17-shot rally to move the score to 3-0, breaking again in the next game to take control of the first set.

She eventually prevailed 6-2 6-3 over Saville, who was making her first main draw Grand Slam appearance since AO 2021.

Saville was contesting only her third WTA-level match in 11 months as she makes her way back from a significant Achilles injury.

“I think where I’m at is that I really need to get back on court and get some matches under my belt and build from there,” she said.

Another Australian on the comeback path is Priscilla Hon, who exited to Czech Marketa Vondrousova.

The 31st seed broke early and never let up as she ran away with a straight-sets win over world No.221 Hon.

With both players striking 14 winners, the match was largely dictated by errors count. Hon amassed a costly 35 compared to 14 from Vondrousova.

The teenage Tauson won an entertaining contest 6-3 6-4 with plenty of aggression from both players.