The story continues for Sam Stosur at AO 2022 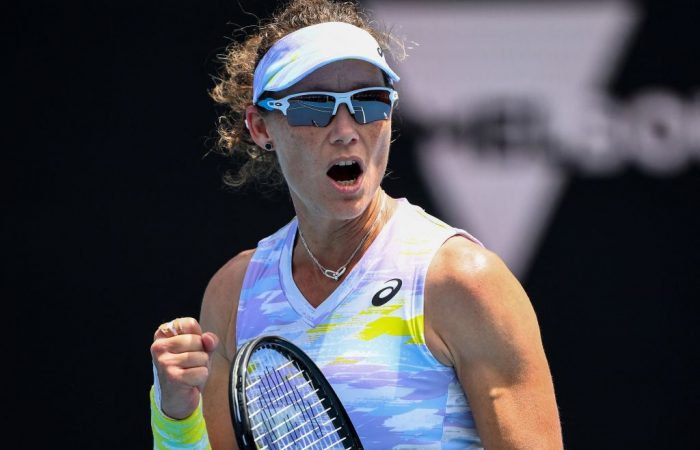 Cheered on by a vocal crowd at the newly opened Kia Arena, Stosur claimed a 6-7(5) 6-3 6-3 victory over American wildcard Robin Anderson to progress to the second round of the Australian Open for the 12th time.

Stosur will continue to compete in doubles after AO 2022 but is contesting the last singles event of her career.

The experience showed as the Australian persisted against world No.169 Anderson, who was making her major debut.

“It was obviously a long match. It was a tough match. Right from the first couple of games I thought, ‘No, I can do this today’. Hung in there and, yeah, obviously very happy to get the win.”

In an understandably nervous start at Kia Arena, Stosur dropped serve in the second game of the match. She recovered to send the set to a tiebreak but as her unforced error count grew, was unable to close out the set.

Still, having held break points on all but two of Anderson’s service games in the opening set, the crowd favourite could also sense her opportunities.

Stosur broke and consolidated to lead 3-0 in the second set, maintaining her edge to serve for the set in the 10th game.

The magnitude of the occasion showed as four set points evaporated for Stosur in a flurry of errors. But in a game extending over 10 minutes, the Australian veteran at last sent it to a decider with two consecutive aces.

After exchanging service breaks in the third and fourth games of the decider, Stosur gained the decisive lead when she consolidated another service break in the next game.

With the crowd roaring their support, an energised Stosur lost just two more points on serve. Anderson, by contrast, appeared to be waning.

After an extended rally that forced an error from the American, Stosur converted her fifth break point – and with that, claimed the match.

Helped by 12 aces and 36 total winners, Stosur recovered from a first-set deficit at the Australian Open for the first time since 2003.

“I couldn’t really ask for much more,” reflected Stosur, who claimed her 20th victory at the Australian Open and the 94th Grand Slam win of her career.

The come-from-behind victory sets up a second-round meeting with either No.10 seed Anastasia Pavlyuchenkova. Stosur holds a 4-4 record against Pavlyuchenkova and winning their only Grand Slam encounter at Roland Garros in 2018.

“We’ve played many times. It’s gone both ways. We’ve had some really close matches, played some good tennis against each other. Played doubles together. We know each other pretty well,” said Stosur.

“Obviously it’s going to be a tough one, no doubt. She’s still one of the best players in the world, had a great year last year. It’s the second round. I can go out there and have some fun again.”