Aleksandar Vukic's career-best start to the 2022 season continues with an upset of No.31 seed Lloyd Harris in the Australian Open first round. 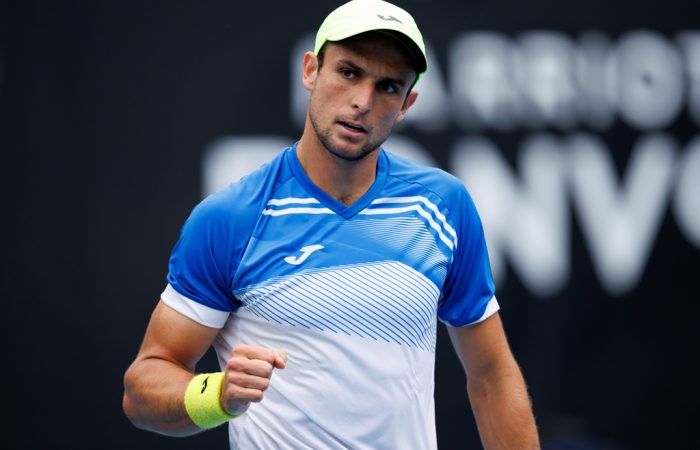 Australia’s Alexandar Vukic has produced the biggest win of his career, downing 30th seed Lloyd Harris in the opening round of Australian Open 2022.

“I’m over the moon. I’m so happy to have won my first main draw Grand Slam match. It was one of the loudest atmospheres I’ve ever heard. It’s a dream,” Vukic said after his four-set victory.

“I think it’s the stage, a high-ranked opponent, you grow up as a kid watching the pros on these courts, and I never thought it would become a reality.”

Lift off in Melbourne! 🚀

It wasn’t an ideal start for Vukic, who dropped serve in the opening game of the first set, with that break point being the only chance created by either player in the opener.

The South African dropped just five points on serve for the opening set, while taking 11 off Vukic as the Australian fought hard to stay in the contest.

The 2021 US Open quarterfinalist closed out the first set 6-4 in 34 minutes, capitalising on Vukic’s 14 unforced errors.

Vukic ramped up the pressure early in the second set, creating four break point chances in Harris’ opening service game before the world No.32 battled through to hold serve.

Vukic continued to make inroads on the Harris serve before eventually landing the break in the eighth game of the set. He served it out strongly to level the contest at a set apiece.

Vukic’s first serve percentage dropped to just 50 per cent early in the third set, forcing him to save three break points.

He was forced to save a set point in his fifth service game but responded magnificently in the next game. Applying superb pressure from the baseline, he pushed Harris deeper, eventually forcing an error and breaking serve.

He served it out and took a two-sets to one lead with the local crowd on Melbourne Park’s Court 3 in full voice.

In the fourth set Vukic again made inroads on the Harris serve, creating three break point chances in his first three return games.

Eventually the set went to a tiebreak and it was the Australian who produced flawless tennis, with the pace of his groundstrokes bringing about several errors from Harris and allowing him to secure the set and the victory.

> READ: Getting to know Aleksandar Vukic

Vukic made his Australian Open main draw debut last year, losing in four sets to then-world No.20 Karen Khachanov. He called on that experience during a crucial stage of today’s contest.

“I thought of that match in the middle of the third set. Being in those positions helps you. I was up 5-2 and a double break in the third set that day,” he said.

“I was trying not to get fired up or caught in the emotion and just focus on playing tennis and I think I did that well today.”

Vukic reached the quarterfinals of the Adelaide International last week, falling to fellow Australian Thanasi Kokkinakis in three sets, with his good form carrying on from a strong finish to 2021.

“At the end of last year, I was doing well on the Challenger tour. I thought I was in a really good headspace and I carried that into this year.

“I’ve always thought the level wasn’t that big a difference, but these guys are more consistent. I feel comfortable playing against guys at this level.”

He will now play 32-year-old Moldovan qualifier Rado Albot in the second round.

“He came through qualies, he’s been playing well,” said Vukic. “He knocked out Australian Chris O’Connell last year, so I don’t want it to happen again this year.”

It was a tougher day for countryman James Duckworth, with veteran Frenchman Adrian Mannarino claiming a 6-4 2-6 3-6 6-2 6-1 win over the Australian.

The match was the 11th five setter in Duckworth’s Grand Slam career, and his fifth at the Australian Open.

Duckworth created seven break point chances in the opening set, but could only convert one, with 21 unforced errors preventing him from capitalising on his opportunities.

The Australian dominated the second and third sets, claiming them 6-2, 6-3 with four breaks of serve.

With Duckworth seemingly headed to victory, Mannarino lifted significantly, and finding the form reminiscent of last year’s Wimbledon first round, when he led Roger Federer two sets to one before suffering a knee injury.

Duckworth made only 17 errors in the second and third sets, but 53 across the other three, with some on crucial points proving especially costly.

After his ATP-title breakthrough in Adelaide last week, Thanasi Kokkinakis suffered a first-round loss at the Australian Open, exiting in straight sets to Germany’s Yannick Hanfmann.