Kokkinakis bows out at Australian Open 2022

Australian wildcard Thanasi Kokkinakis has been beaten by German qualifier Yannick Hanfmann in the Australian Open 2022 opening round. 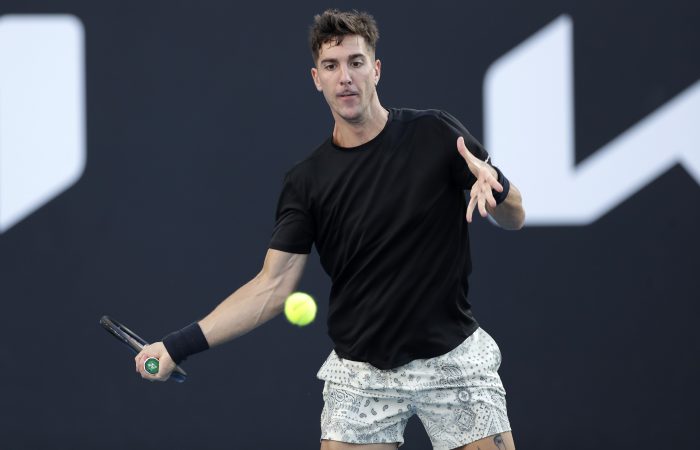 Thanasi Kokkinakis’ Australian Open 2022 campaign has ended in the opening round.

The 25-year-old Australian arrived at the tournament in red-hot form, having captured his maiden ATP singles title at last week’s Adelaide International.

However, the physical and emotional toll of that long-awaited breakthrough was evident at Melbourne Park this evening.

German qualifier Yannick Hanfmann proved too solid in their opening-round encounter, recording a 6-2 6-3 6-2 victory against a flat Kokkinakis.

With an excited Court 3 crowd in full voice as Kokkinakis stepped onto court, the world No.103 couldn’t help but smile.

Kokkinakis made a shaky start, however, with seven unforced errors hurting as Hanfmann raced to a 3-0 lead.

Hanfmann, who was born with a hearing impairment, was playing measured tennis and having great success at the net. This was preventing Kokkinakis from building any momentum in the match.

Kokkinakis had chances early in the second set, but a steely Hanfmann saved two break points in the third game.

The 30-year-old qualifier refused to relinquish control, breaking the Kokkinakis serve in the next game and then comfortably holding to lead 4-1.

Kokkinakis earned another three break points in the seventh game, but again was unable to capitalise.

Hanfmann continued to have too many answers, despite a patriotic Australian crowd fervently supporting Kokkinakis.

The German quickly built a 4-1 lead, with a double break, in the third set. And from there, secured victory after two hours and seven minutes on court.

Pretty flat after that😔Hurts I couldn’t get going today.. Thankyou for the support over the last couple weeks, has been incredible🙏🏼
Will try and be better for next year

Hanfmann won 76 per cent of first serve points and saved all eight break points he faced throughout the match, helping him record a first Grand Slam main draw win and set up a second-round showdown with world No.5 Rafael Nadal.

Kokkinakis finished the match with 22 winners and a costly 42 unforced errors. He now turns his attention to the men’s doubles competition, where he’ll partner fellow Aussie and close friend Nick Kyrgios.