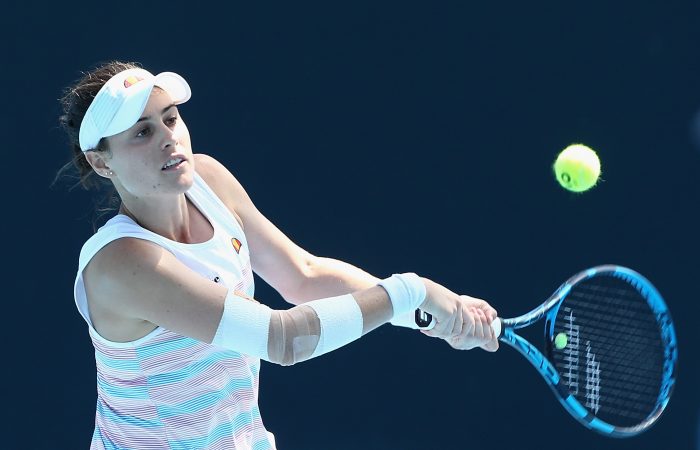 Kimberly Birrell has made a winning start to her Australian Open 2022 qualifying campaign – and created history in the process.

“That’s really exciting,” Birrell said when learning of her history-making effort. “Luckily I had the opportunity to practice on (Kia Arena) when I first arrived in Melbourne and I loved it.

“When I saw on the schedule that I was playing there today, I was really happy. It’s a really beautiful court. I also drive a Kia, so maybe that was a good omen.”

A 58-minute opening set featured several momentum changes, but it was Birrell who took control when it mattered most. The world No.664 raced through a deciding tiebreak without dropping a point.

Melnikova snared the second set against the Aussie wildcard, who is contesting only her second tournament after being sidelined for 10 months with a right elbow injury.

Birrell impressively fought back though, winning a run of four consecutive games to build a 4-1 lead in the deciding set.

The 32-year-old Melnikova took an off-court medical timeout at this stage and only won two points after returning, as Birrell confidently sealed victory after two hours and 32 minutes on court.

“I’m super proud of the way I played and fought,” Birrell said.

The result puts Birrell one step closer to qualifying at a Grand Slam tournament for the first time. She has competed in the Australian Open main draw on three previous occasions as a wildcard and advanced to the third round in a career-best run in 2019.

Now set to face No.22 seed Ekaterine Gorgodze of Georgia in the second round, Birrell is excited for the opportunity.

“It has been really tough, especially this last year,” said Birrell, admitting her injury struggles had left her doubting whether she could return to this level.

“I was saying to my team this morning, I can’t believe I’m even going to be stepping out on court. To even be playing, I’m just so grateful.”

Earlier today, South Australian teen Charlotte Kempenaers-Pocz made a promising start in her first-round match against Ukrainian Kateryna Bondarenko. However the former world No.29 showed her experience, fighting back to record a 5-7 6-3 6-2 victory in two hours and 14 minutes.

The 17-year-old Kempenaers-Pocz gallantly recovered from a right-ankle injury scare in the sixth game of the opening set and hit 28 winners, including seven aces. However, 47 unforced errors proved costly for the world No.1043.

Bondarenko, a 35-year-old ranked No.254, finished the match with 31 winners of her own. The Australian Open 2008 women’s doubles champion’s backhand proved a major weapon, striking 21 winners.

The Australian Open 2022 qualifying competition continues across Melbourne Park this week, with no ticket required for vaccinated fans to enjoy the action.