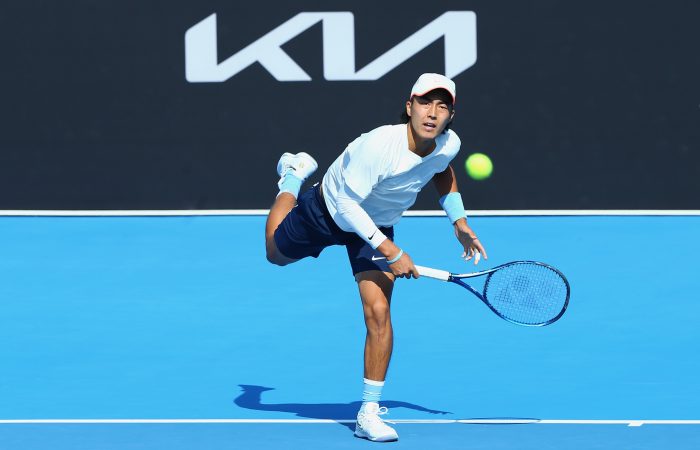 Hijikata posted an impressive 6-1 7-5 opening-round victory at Melbourne Park, overcoming the experienced world No.105 in 82 minutes.

“First match for the year is never really easy, so I’m pretty happy with the performance,” Hijikata said.

“It’s always different going from training to having match pressure, but I knew I had put in a lot of hard work over the summer and that I was playing some good tennis. I was happy I was able to show my level out there today and see that all my hard work is paying off.”

It is the second top-150 win of the 20-year-old’s career and continues an exciting rise for the world No.375.

Hijikata also claimed four ITF Futures singles titles during 2021 and rose to a career-high No.367 in November.

This rapid improvement caught the attention of former world No.1 Lleyton Hewitt, who invited Hijikata to join the Australian team as hitting partner at the 2021 Davis Cup Finals.

“Honestly it was a massive opportunity for me and I think it’s helped my game a lot,” Hijikata said, noting the positive influence of Hewitt and Australian Davis Cup coach Tony Roche.

“I was spending a lot of time on court and it instilled this belief in me that I can play with these top guys.”

Hijikata is now one win away from qualifying at an ATP Tour tournament for the first time, with second seed Henri Laaksonen awaiting in the final qualifying round.

He has beaten the No.98-ranked Swiss once before, scoring his only other top-150 win against Laaksonen during Australian Open 2020 qualifying.

“He’s a quality player. I know I’m going to have to play well to have a chance to win,” Hijikata said.

“I’m looking forward to it. I’m just excited to play again tomorrow for a spot in the main draw.”

The Melbourne local now turns his attention to the doubles competition, where he’ll team up with compatriot Alexei Popyrin. They face Spanish pair Rafael Nadal and Jaume Munar in the first round.

Melbourne Summer Set tickets are now on sale, with prices beginning at $19 for main draw matches. Kids can attend for free.