Alex de Minaur defeats world No.7 Matteo Berrettini at the ATP Cup in Sydney to steer Team Australia to a memorable victory. 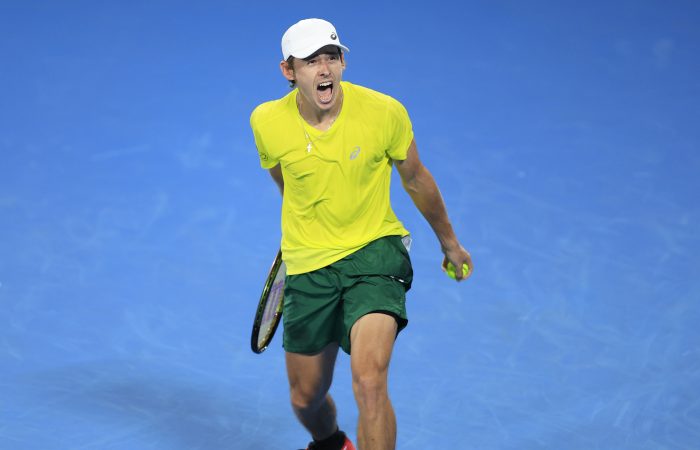 Alex de Minaur has scored one of the biggest wins of his career to help Team Australia score an impressive ATP Cup victory.

The 22-year-old Australian stunned world No.7 Matteo Berrettini 6-3 7-6(4) to level this evening’s tie against Team Italy at Ken Rosewall Arena in Sydney.

“I think it’s no secret that this court brings out the best in me,” De Minaur told an appreciative crowd.

“This is what you work hard for, to play on your home court in front of friends and family. And playing for Australia, there is no greater honour.”

An unnerved De Minaur was up for the challenge against the Wimbledon 2021 finalist, losing only four points on serve in a dominant opening set.

De Minaur maintained his red-hot momentum in the second set, breaking in the seventh game to edge ahead.

The world No.34 was broken serving for the match, but bravely responded to seal an incredible victory in a second-set tiebreak.

Earlier in the evening, Jannik Sinner had provided Team Italy with a perfect start.

The world No.10 powered to a 6-1 6-3 victory against Max Purcell, who was elevated into the No.2 singles position after world No.49 James Duckworth was sidelined with hip pain.

Sinner proved too strong, despite a spirited late charge from No.176-ranked Purcell. The 20-year-old Italian lost only 10 points on serve and committed just three unforced errors in the 63-minute match.

“It was a lot of fun. We always love playing for Australia in Sydney,” beamed world No.13 Peers after securing victory against the 2021 finalists.

Team Russia made a winning start to its 2022 campaign, scoring a hard-fought 2-1 victory against Team France earlier today.