Storm Sanders and Ajla Tomljanovic have steered Australia into the semifinals at the Billie Jean King Cup in Prague. 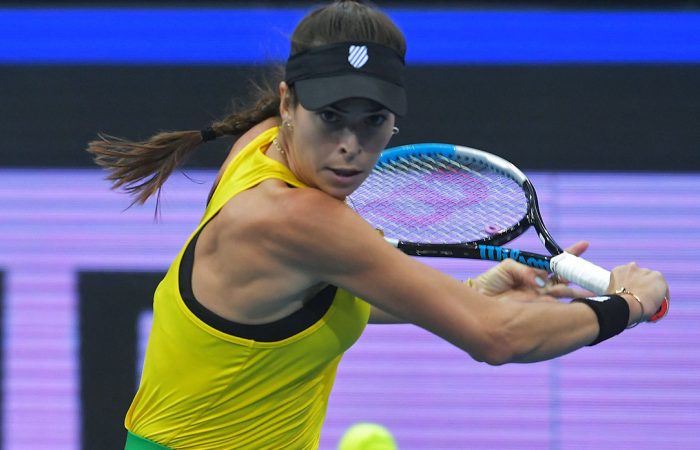 For only the fifth time in the past 30 years, Australia has advanced to the Billie Jean King Cup semifinals.

Storm Sanders and Ajla Tomljanovic each won singles rubbers today in Prague to clinch a 2-1 victory against Belarus in the prestigious team competition.

The result ensures Australia finishes on top of Group B in the round-robin section of the Billie Jean King Cup Finals and progresses to the knock-out semifinals.

Sanders continued her impressive form, scoring a 6-3 6-3 win against Yuliya Hatouka in the opening singles rubber.

The 27-year-old Australian struck 17 winners and did not face a break point on serve in a confident display, clinching victory in 63 minutes.

“For me to come out and deliver under pressure, it’s a great feeling,” said Sanders.

“I played a really solid match. I was a little bit tired from my two matches on Tuesday, but I came out and just fought really hard.”

Making her first appearance for the week, Tomljanovic overcome a slow start to edge out world No.88 Aliaksandra Sasnovich 4-6 6-2 6-3 in the second singles rubber.

The 28-year-old Australian’s brilliant ball-striking wore down Sasnovich in a one-hour and 57-minute battle. Tomljanovic played a much cleaner match, committing 17 unforced errors compared to her opponent’s 48.

“There really is no greater feeling,” said Tomljanovic after securing victory for Australia. “I came here to help the team and I’ve ended up doing that, so that makes me happy.”

There was some consolation for Sasnovich, combining with Lidziya Marozava to defeat Oliva Gadecki and Ellen Perez 6-4 6-4 in the doubles.

Australia now faces Switzerland in the semifinals, which will be played tomorrow evening in Prague (starting Saturday 3am AEDT).